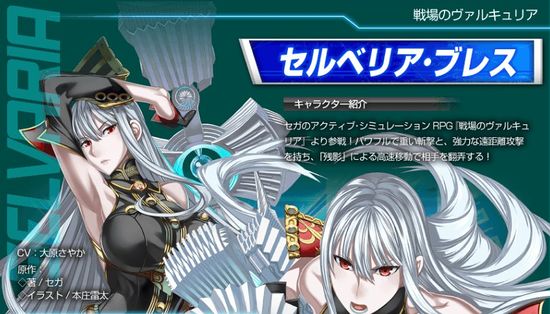 Originally from Valkyria Chronicles, Selvaria's the grumpy albino lady who shot your squad's face off with her laser cannon and unwavering devotion to the main antagonist. Now her lasers can be yours! (Highly explosive. Handle with care.) She debuted in the console version, unlocked after beating Arcade Mode with more Climax Art KO's than normal KO's. She has no storyline in both Arcade and Dream Duel Mode. She was later added to the Version 1.30 arcade update. However for an unknown reason, Selvaria can be played in Single play Arcade Mode in arcade version, and it is unknown if she has his arcade story or hasn't, just like Labrys (both versions) and Elizabeth in original Persona 4 Arena.

In Ignition, she became a regular character.

Selvaria is primarily a mid-range zoning character who thrives off of chunky combos from long-reaching normals. Sel's main goal in most matchups is to use her long reach to unleash brutal whiff punishes on opponents, from which she scores knockdowns to continue her pressure and keep control of the match. While she possesses long-range tools for occasional zoning, they offer more risk and considerably less reward than fighting at mid-range or closer.

Alicia - Probably the best "default" assist for Selvaria. Alicia's 5S grenade toss greatly expands Selvaria's combo options with its short cooldown and powerful untechable time. Her 4/6S requires more setup, but its multiple hits and crossup potential offer great utility for okizeme. When in doubt, Alicia is a great choice for an assist in the vast majority of matchups.

Accelerator - Offers less combo utility than Alicia in exchange for covering some of Selvaria's defensive weaknesses. 4/6S is a good full-screen poke against grounded opponents that allows easy followups on hit, and despite its long cooldown, 5S is a good way to give aggressive opponents pause or keep a cornered opponent from mashing their way free from your pressure. For players more skilled at Selvaria's neutral game, however, the damage potential of Alicia support usually offers better returns.

Character Potential: Call assists 4 times to increase damage dealt by 10% for 10 seconds. Can be activated twice a round.

236A (normal) (blocked)
Note: These punishes only work if 236A is not spaced out properly. If KYH does ABC > Piercer, you can punish. But if she does 2A 2A ABC > Piercer, 5C and War Dance cannot punish. You can avoid this problem by pushblocking the 5C, making the Piercer whiff (midscreen) and allowing you to punish if KYH did the A version. If she did the C version, it will be blocked, and you will be unable to punish.