Default control scheme for Fight of Animals on gamepad.

Assistant Mode: Select Assistant mode at character select to change how your L and H buttons work. Mashing L and H either standing or crouching will perform specific auto combos. This mode does not change how Skill or Super buttons work.

How to Read or Write Combos 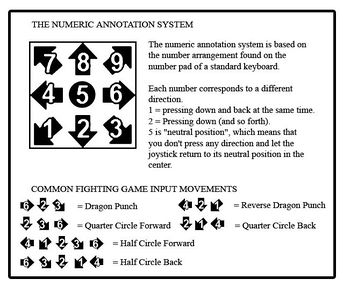 The most common language for writing combos in fighting games is through numpad notation (see image to the right). Your direction button presses are numbers (if no button is pressed, use 5), and you will describe attacks using their button type (L,H,S and Super).

For example, the following basic combo for Crowrilla:

Please consider using this notation in any fighting game that you play, since most players will understand anywhere in the world.