See Fight of Animals/Controls for the basic button explanation. Every character has the following attacks: 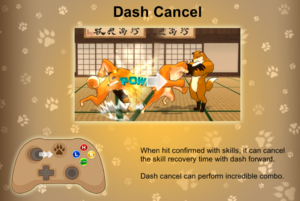 Fight of Animals' primary combo model is juggling. At the moment it appears juggle limits are specific to characters, but more research is needed.

Long combos in Fight of Animals rely on the Dash Cancel mechanic. Perform any skill (except universal overhead) and quickly double tap forward (66) on hit to cancel the recovery of the move with a forward dash.

The gauge is used for two functions: Super Skill or Burst. Press the Super button when you're not blocking to execute the Super Skill.

Press the Super button when you're in blockstun, hitstun or juggle state to burst. Bursts are a single hit of 0 damage that forces the opponent back on block or hit. After bursting, your character is airborne in a unique animation and cannot block for a short time. If your opponent blocks the burst they are not forced very far away and you can be punished.

Since the burst counts as an attack, it can be countered with a burst! In that situation, the counter-burst always wins the trade since you cannot block for a short time. Walking Cat is able to parry bursts with his licking skill. 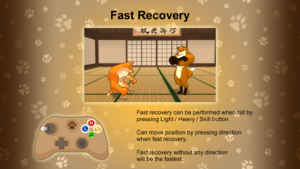 When your character hits the ground (after the initial bounce effect), press Light, Heavy or Skill for the following recovery options: