New to the Melty Blood series, players can create their own colors in addition to the 20 base colors that come with the game. You have 6 custom color slots, with no CP cost to make a custom color. Color customization consists of 6 different pieces of the character's sprite, with 20 preset color options for each of the 6 pieces. You can also cycle between various poses that often showcase special sprites like intro animations, the VFX of normals/specials, and weapons/outfits used in Arc Drives and Last Arcs. 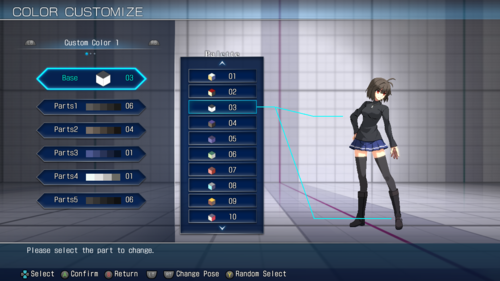 Every player gets a card that displays their Online ID, Total Ranked Matches, Total Ranked Wins, Win Ratio, and Ranking Points (RP). The player can customize the icon, plate, and title. 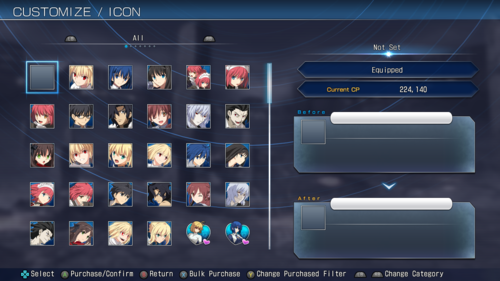 Players can purchase new Icons, Plates, Title Plates, and Words from the shop using CP. In addition, you can purchase words to create your own Free Word. This menu consists of Letters, Numbers, Hiragana, Katakana, and Japanese & English words. You can combine up to 3 of them, with an overall character limit of 13 Full-width symbols or 26 Half-width characters.

The only things you can't purchase are the Character Love icons, Gold Coin icons, and Special title plates featuring the characters and direct quote from the character, or a comment such as "Arcueid Master" in Japanese. These are locked behind Achievements.

You can earn the in-game currency called CP by playing the game. Every match you play offline earns you 500CP regardless of the result of the match or whether or not it's a CPU or a Player you're fighting. In addition, you gain CP from the following.

You can also spend CP on art in the Gallery section.