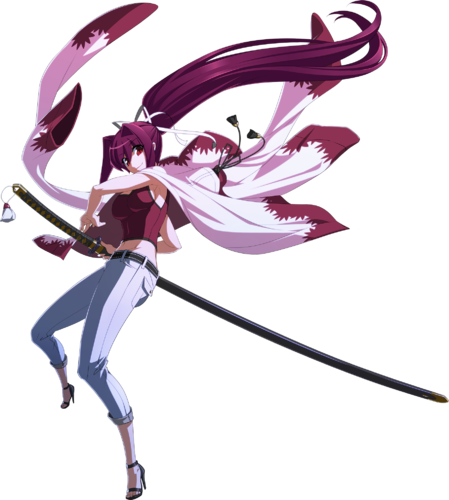 A rather dangerous looking girl who wields as blade as tall as herself. She is a descendant of the protectors of this domain, but her family has abandoned that task, with the exception of the single blade she wields. Yuzuriha herself has heard of Voids and the Night Blade, but finds the entire concept ridiculous -- her parents failed to pass on the tradition. One night, she takes the heirloom sword, and heads into the Hollow Night, where all the In-Births are said to gather. Why must she go out tonight, you ask? Well, because it seems like fun, of course!

Yuzuriha pairs far-reaching space control with strong movement to play a dynamic zoning game. She doesn't seek to hold her ground against oncoming opponents, but instead flits from far to near and back again as suits her current situation. She engages on her own terms, seeking to force the opponent into playing her game. Good range and flexible cancel options allow Yuzuriha to convert almost any hit into consistent damage and corner carry. She can also combo off her throw for additional damage, meter, and carry. Strong burst movement and good walk/dash speed allow her to quickly close space and begin pressure if given the opportunity. Stable damage output from nearly anywhere means she's a constant threat.

Her close-quarters pressure is limited by her slow dash startup, limited forward-moving options, and lack of standing overhead. Her ranged options consist entirely of mids and lows, and she has few viable tricks with which to catch an experienced opponent off guard. She needs to draw the opponent into playing her game to win, but the ability to combo off her throw for damage, meter, and corner carry means the opponent can never relax. Defense is also a weakness due to poor range vs frame data on counterpoking normals, situational option coverage, no meterless reversal, and slow/situational metered options. Systematic tools such as Veil Off and Guard Thrust can alleviate this somewhat, so careful management of resources is vital.

Yuzuriha enters a quick-draw stance after using certain abilities. Startup and recovery on these abilities are reduced while in stance, and she can chain them with relative freedom. Each ability used will consume a stance mark, so her available options decrease with use until she exits stance. She also trades her normal movement options and ability to block for a slow walk, a teleport dash, a command jump, and a dodge. Her combination of range and frame data is unmatched in stance, giving her firm control of neutral. She has no overheads or throw in stance, but her frame traps, mobility, and ability to punish predictable opponents demand respect.