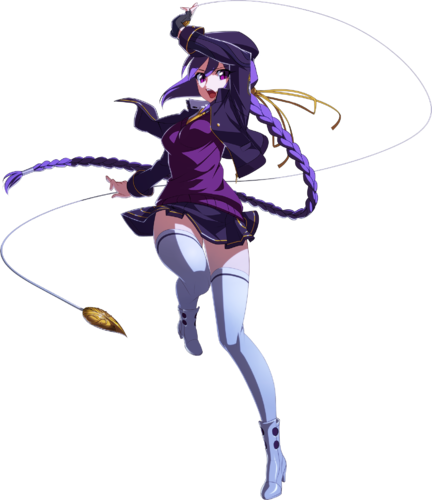 A mysterious girl who is said to have saved a city from a dark vampire, once upon a time… At least, in appearance. Aside from the fact that she calls herself “Eltnum”, no one knows anything about this character. She suddenly appeared in the dark night, and then returned to darkness equally as fast, earning her the title of “Wanderer”. The Night of a city, which she claims to be her territory. It has become her mission to educate the young rookies in the strict ways of her industry.

Eltnum is a well-rounded character who has tools for most situations, but excels as an “in your face” style rushdown character. With her 5A and 2A whiff cancel vorpal trait, it's extremely scary trying to challenge her meaty options. Eltnum can fight from a variety of ranges with the help of gun shots and ricochet shots. On defense, her kit includes both metered and meterless reversal options, decent anti-assault/throw OSes, and a 5 frame A button.

As well equipped as she is, Eltnum will struggle against a majority of stronger neutral characters in UNICLR. Outside of mid to close range, her moves have slow startup. Her pressure also requires lots of creativity in order to break patient defense, in the case of her strong staggers dissuading mashing. Lastly, Eltnum will suffer greatly from auto-piloting pressure, and needs to play in according to the opponent's shield habits. Overall, juggling resources while carefully watching your opponent is the core gameplan for Eltnum.