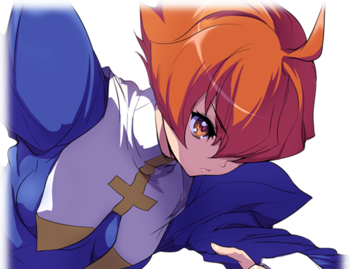 After losing her entire family to a celestial event triggered by demons, Elsa immediately joined the European branch of the Celestial Union. She can come across as somewhat indifferent to strangers, but she is known to be very caring towards her friends. However, she has a one-track mind and will frequently lose track of anything not related to her current tasks. She can be very serious at times, and is her own worst critic, which occasionally leads to radical mood swings.

In a desperate attempt to stay alive after her battle with the demon Clarice, she entered into a contract with Koshmar, the Arcana of Punishment. As a result of the agreement, Elsa was burdened not only with immortality, but with “Sin and Punishment” as well. She moved to Japan in order to help Rosenberg eliminate the Drexler Institute once and for all.

Elsa is a straightforward character with good tools who converts hard off of knockdowns. Though her normals don't have the greatest range and she can be considered somewhat meter hungry, she has a versatile move set including both zoning and rushdown attributes, as well as one of the best DPs in the game.

You might be interested in Elsa if you don't mind working to get in, but love running strong mixups that lead to high damage.