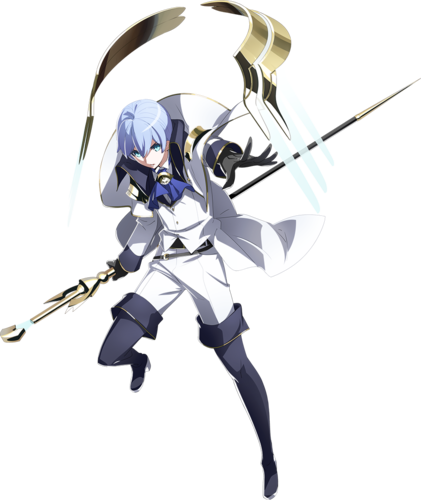 Londrekia's combo routing is very stable, but can be optimized in a wide variety of ways. Starting with the combos listed below is recommended.

Londrekia's combo theory is all relative to his positioning to the corner. When Londrekia carries the opponent to the corner, he can incorporate freeze (236x) specials to do more damage and steal GRD. (This info can be found in the "Corner/Freeze Theory" section.) However, when midscreen, his combo routing can be summarized as:

Londrekia has three launchers depending on his distance to the opponent: -3C (optimal) -5BB (consistent, less damage) -4C (not ideal, least damage)

Although 4C can stabilize pretty much any hit that Londrekia connects, it is the least ideal launcher and should be avoided if at all possible. With this in mind, structuring Londrekia's pressure around ways to confirm into 3C and 5BB is ideal.

Note: advanced midscreen routing usually involves linking 214C with 2B 214B[A]. In this case, the combo structure is:

Because of Londrekia's generous corner carry, many launchers can move the opponent from midscreen into the corner. It is valuable to keep in mind the distance from the corner so that freeze routing can be incorporated even in midscreen confirms. Here are two examples:

In the first example, 5BB can be used after the rekka extension for the freeze. In the second example, 66B connects close enough to the corner to connect 236[B] instead of a rekka ender. The hitbox on 236[B] is particularly generous, so take note of when these opportunities arise.

Combos that can carry the opponent to the corner from round start positioning.

https://www.youtube.com/watch?v=6jdiycnOt_A - Recommended resource for optimal combos. Debuff optimizations are included. Use the timestamps in the description to navigate to the starter you want to learn about.

https://docs.google.com/document/d/1ENle_98jPqElptabFMtN8S5EiCSLTr6gZ-QAi3ktyCI/edit - Combo doc with some basic concepts for most starters. Recommended for any new players that want to avoid being overwhelmed.

https://docs.google.com/document/d/1ZlWXU3n4hGx4SMthIgSTAtoMK5WW_zGj84gsy5SdDNQ/edit - A doc that covers many starters, but is not always optimal.

https://youtu.be/Y1HDBbzH8iQ - A video covering many rekka (214x) starters. Covers many niche rekka starters, but is not always optimal.