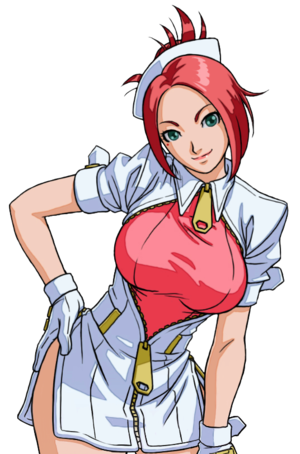 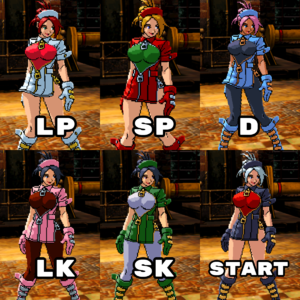 Fun fact (RF2): Ballet is her hobby, and being able to tell if people are mad is her special skill. She enjoys trying new sweets (But she can’t eat too much)

Garnet is a tricky, technical rushdown character who excels at pushing opponents towards the corner and capitalising on mistakes with huge damage. With fantastic ground movement speed and solid light normals for poking and starting pressure, opponents can very easily find themselves backed against the wall, where Garnet can begin her onslaught of staggers and frame traps, all of which lead to some of the most damaging meterless combos in the game, especially if she has her Boost Dive active. However, her ground game, while strong, is somewhat limited thanks to a lack of safety on her special moves and her heavy normals being quite risky to throw out in neutral, and her extremely slow and floaty jump arc makes her very easy to anti-air.
Overall, Garnet is a strong character who rewards aggression, creativity, and a little bit of execution.

The following differences all apply to The Rumble Fish 2 for NesicaxLive v1.1.

Basic meterless combo. By slightly delaying the follow-up string after the launcher, you can ensure a knockdown. You can pick up the juggle higher if you want to try and chase down an air tech, but it's generally not advisable to do so.

Basic combo into OA. Preferable to the meterless combo when possible, since it leads to better oki. Delay the super slightly if your combo is longer, to make sure the opponent can't escape the second hit.

Easy confirm from overhead into Advancing Attack. You can technically go straight into 236SK from 6B, but AA makes it safer since it's easier to confirm.

Highly damaging corner combo that builds a ton of Offensive Gauge. Best used as a punish since you can't really confirm into it.

Basic combo from Jolt Attack. Slightly delay the first jump before continuing the combo. After j.SK > j.SP, you can also choose to follow up with something like 2SP > 236LP~6LP if you want.