Netplay for the Atomiswave version of The Rumble Fish 2 is currently available on Fightcade through Flycast Dojo. The current reference version of the ROM is rumblef2.zip from the MAME 0.218 romset.

Just download the current version of Fightcade and add rumblef2.zip to Fightcade\emulator\flycast\ROMS.

Launch Fightcade and search for "rumblef2". Hover over the screenshot of the game and click on "Join" to join the game's channel. 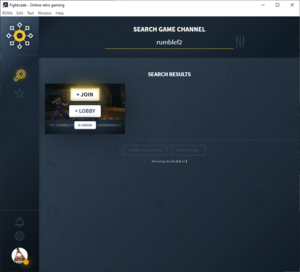 If you need any help with setup, be sure to visit the #flycast-emulator room in the Official Fightcade Discord.

To set up your controls in Flycast, launch the emulator by opening Fightcade\emulator\flycast\fcadeflycast.exe and head to Settings -> Controls. Set your controller of choice to Port A. From there, press Map to open the Controller Mapping menu. 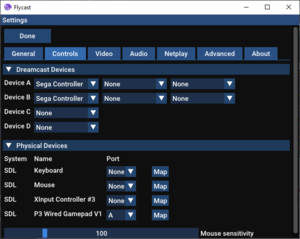 The following is a sample mapping for XInput (XBOX 360) Controllers created by pokeshark on the Official Fightcade Discord. Note that the the triggers are on the right hand side, corresponding with analog axes.

This sample mapping aligns nicely with the default Rumble Fish 2 controls, with Button 3 / Heavy Punch corresponding with the Dodge button.