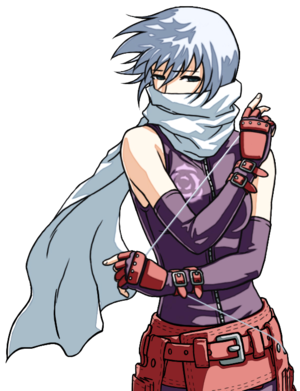 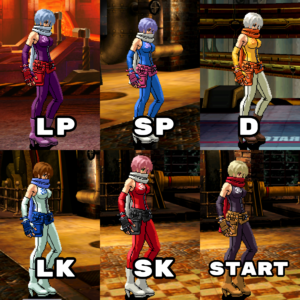 Sheryl is a stoic female assassin who works under Hazama. She fights with a tricky set of thin wires to ensnare and electrocute her opponents.

Sheryl is a character that likes to move around the screen while setting traps down and keeping your distance from her opponent. Use her quick pokes to interrupt your opponents advances and give yourself room to setup.

Sheryl is generally improved from Atomiswave to Nesica and gains the ability to use her 623P detonate while airborne.

Sheryl is primarily a zoning/setplay character and wants to run away and keep her opponent at bay for as long as possible. This can be pretty difficult as her normals and tools aren't the best for dealing with head on attacks. Making good use of movement (dashing, high jumps) to keep yourself evasive and setting traps. Good use of system mechanics (IB, Dodge) is very important for keeping yourself from getting mauled by rushdown characters. Sheryl's 623K is a reversal but suffers from low invincibility frames and a small hitboxes. However the follow up stance from it at least makes it a fairly safe option should your opponent manage to block it.

Her basic zoning tool is 236P which shoots out a fireball in front of her. The LP version can be dodged under or super jumped over easily but is good at covering normal jumps and dash ins. 236SP can be aimed up or down to cover these dead zones that LP can't reach but it's so slow that you might get stuffed before it comes out. This makes 236SP a very predictive answer to an opponents approach.

The real crux of Sheryl's game is her 214X traps. Traps should be set whenever it is safe and possible to do so. You typically want to set your traps so that they bounce back and forth between the edge's of the screen to cover the most space possible. A good way of achieving this is to alternate between P and K sets (close and far). IF you want to focus damage on a single spot then you can stack multiple markers on top of each other for extra damage. Make quick decisive decisions on how to use your traps because if your opponent strays too far from them, they will become useless and you will be forced to reset and prepare a new set of traps. Sometimes a single K trap set into 623P is all you need to control neutral. If you become too greedy and try to set 4 traps every time you may end up getting rushed down before you can use them.

Unblockable setups: If your opponent is stuck blocking 623P shots, you can run up and use JA to unblockable them and follow up with a combo. Can also instead go for a high, low mixup using 6SP.