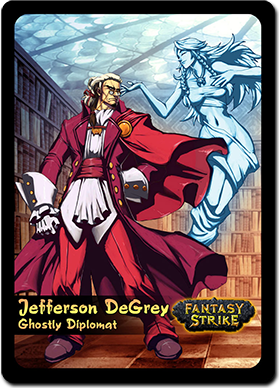 By silver tongue or bloodletting, I will have justice. DeGrey is a Lawyer who will shine light onto the truth and bring justice to those who would do wrong by any means necessary.

DeGrey is extremely old and has been fighting for truth and justice for a long time. After an ill fated encounter with a particular tyrant, he made a pact on deaths door with the Nox Oracle, Persephone, to live on until he had finished his mission of crushing the tyrant- with the caveat that his time would be up when his mission was complete. She left behind a ghostly reminder in Desdemona to be sure that he didn't stray from his mission. He successfully defeated the tyrant, but to his shock found that he still lived on, his mission not yet complete.

DeGrey is a character heavily oriented around frame traps. Generally you are going to want to be close in on an opponent where you can pressure and punish them effectively. In the corner, his pressure becomes highly effective and his damage on counterhit is quite high. He also has a powerful neutral tool in his otherworldly friend, Desdemona. DeGrey's biggest weaknesses are his lack of a reliable reversal and his risky tools in neutral.

In terms of strategy, your play is going to depend heavily on whether you are against a zoner or not.

The most common oki situations are:

This is the classic oki tool available to must characters. After a knockdown, walk up to throw range and mix between meaty nAA ("strike") and meaty throw. Their defensive options are typically blocking, yomi, or frame 1 reversal moves.

After a throw, wait a moment then gB, and mix between a delayed followup with A (daggerfall) or a throw. Both are meaty, and meaty daggerfall will combo into nAA for 2 damage (not hitconfirmable).

This is strictly stronger than the usual strike/throw mixup, as the throw option is unaffected and the strike option does 1 more damage on hit, or 1 more chip on block.

After knocking down the opponent, jump over them and use jC while directly overhead. They must block the correct direction to avoid being caught by ghost.

If ghost hits, follow up with njA nAA for 3 damage, or gBB for 2 damage and a lot of pushback, comboing into fA close to the corner for 3 damage.

If ghost is blocked, perform a mixup between a tick throw and nAA. The throw will get oki, the nA will be 2 damage. They must react to the side you land on in order to block the nA successfully, adding mental overhead - if they block the wrong way, that loses to both throw and nAA.

This is a delicately timed oki setup, but a very explosive one - it's an ambiguous crossup safejump! In other words, it's a 2 option mixup where if you win you deal 3-4 damage depending on ghost position, and if you lose you take none and get to keep pressuring, or even punish if they responded unsafely. Note that you can also use an ambiguous crossup ghost with the initial setup, should the jA not be worth it (eg, versus Lum gS).

To perform this off a forward throw, microwalk and delay then jump at them - if ghost is positioned properly, you can hit them with jA nAxC jBB for 4 damage and a knockdown, else jA nAA for 3 damage. This is true for every character the setup works on at all, so every character but Geiger and DeGrey himself.

There are two key technical aspects of it to learn: timing (very precise) and positioning (varied per opponent). The details here are after forward throw.

You need to wait 6 frames before you jump, or else it'll whiff - this makes it the most technically difficult oki tool, as even a frame later and it is no longer meaty, though the window for it being safe is very forgiving.

Labbing details: using record mode, the throw animation ends at frame 96, and the first frame you can jump from is frame 96+6=102.

Off a throw, DeGrey can send the ghost out as a forced block, then blockstring into jBB for a guaranteed damage. This is unsafe on block, so it should typically only be used to win the round.

Beware that characters with frame 1 invincible moves may use this to avoid blocking the ghost and catch DeGrey out of the flying kicks, transforming this into a DeGrey favoured mixup instead of a guaranteed win. The following characters can do this:

Some timings have a weird delay in them that should be worked out in training mode before use in real matches.

This will typically net very little benefit, unless you are too far to use any other oki options. If so, using meaty or marginally post-meaty bA occasionally will force the opponent to block or risk taking damage, allowing you to walk up safely whenever you do not use bA here. This will rarely deal damage in itself, but it will gain initiative when bA is not used.

This is effectively a way to "rescue" a failed oki.