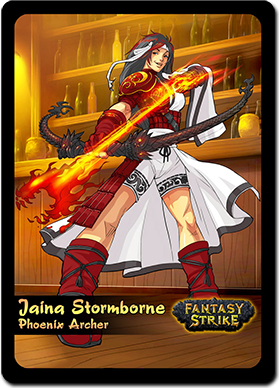 Jaina is a hot-tempered show-off, but she has the martial arts and archery skills to back it up. She wields a bow that creates flame arrows from thin air. Her connection with fire magic hints that her veins flow with the blood of the red dragon.

Jaina is a zoning character that put out many projectiles on the screen at different heights and angles as well as apply strong pressure with her divekick.

Jaina is capable of putting multiple projectiles on screen at a time. Her ground Flame Arrow can be charged up until it is unblockable.

. You want to send a level one arrow their way and cause them to jump forward at you. You can almost always counter this with

at the proper distance, which will often juggle and give you at least two damage. Sometimes to counter a jump in you may need to

instead. If they don't take the bait and either neutral jump or use projectiles defensively to stall out, you should take advantage of Jaina's unique ability to put an arced fireball on screen with

while you still have a horizontal fireball from

going. At proper spacing, they will have no choice but to back up or reversal. If they end up in the corner, just use fireball chip damage to pressure them until they make a mistake.

is the most niche tool but it will handily stuff many distant air to airs from opponents, use mostly on hard reads against desperate opponents.

If you land a

, immediately take advantage of the enormous distance between you and the opponent by laying down a

then a Rain of Fire (

). Opponents have almost no choice but to take a point of chip damage, at best, if timed properly.