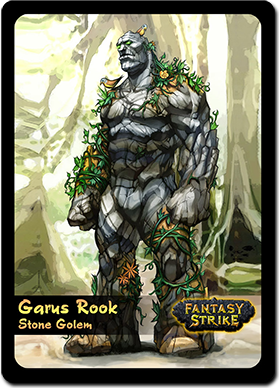 Rook is a stone golem who fights at close range by grappling his opponents. He created the Fantasy Strike tournament that the events of the story take place in.

"Rook was not always made of stone, though the circumstances of his transformation are little-known. What is known is that his stone form seems to have slowed his aging and provide incredible armor. Rook has always loved nature and felt close to it and now he is a force of nature. Towering, mighty, and dangerous, yet gentle and warm. (...) DeGrey suggested he (Rook) create an event that would bring together people from all over the many lands. To frame it as a competition, but to actually use it as a way of getting powerful warriors together so they’d talk about the injustices going in their respective lands. Rook created the Fantasy Strike tournament to this end" (source).

Rook is the big grappler archetype and the character with the most health in the game. Very slow to move but if he gets a knockdown while close he can win the round off of that. This polarizing dynamic can cause rounds with Rook to appear lopsided. Sometimes Rook gets in and demolishes the opponent like it was nothing, and other times the opponent effortlessly denies all of Rook's approaches without giving him a chance to hit. A good Rook player will maintain a steady mindset through all this in order to come out on top.

Rook's goal is to get close to the opponent and knock them down. This is because Rook has the best close-range options in the game. This is so true that characters who normally play up-close, such as Valerie, no longer want to play close to Rook, and instead change play styles to keep Rook away. There are a variety of tools at Rook's disposal to help him get in. His biggest gap closer is to knockdown with earthquake then immediately landslide.

Once Rook gains a knockdown, he has a 66% chance to win the next exchange when there is no reversal involved. The mixup involves three meaty options:

All of these options cause knockdown and let Rook repeat the mixup until the opponent guesses correctly. This vortex is Rook's most dangerous tool. Rook's whole gameplan often depends upon landing that one good knockdown which can snowball into winning the entire round.

Note: After knocking down with windmill crusher, a microstep forward is required for throw and sweep to reach again. If the sweep is too hard to time, kick is easier and will work as a meaty 2 damage with no knockdown.

After throw, press throw when the opponent's health bar just finishes depleting, or versus Onimaru and Rook at about 10% left, to land a meaty throw.

After windmill crusher, walk forward and press throw just as the knee of the back leg touches the back of the other leg to land a meaty throw.

After a landed EQ knockdown, doing landslide and then thunderclap immediately makes the thunderclap hit meaty if it was in range of the opponent.

Basics With Beav, Rook you like a hurricane by trapdoorbeaver