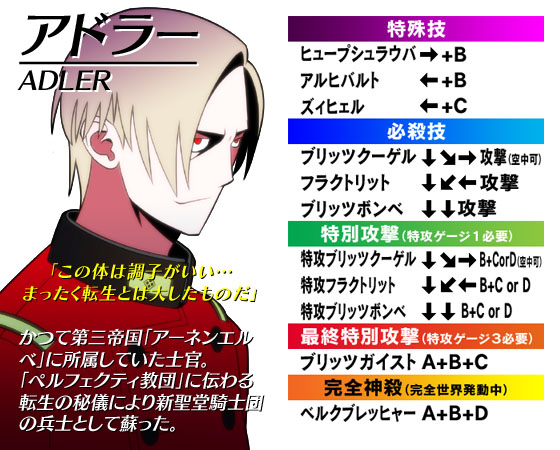 "An officer once belonging to the Third Reich's Ahnenerbe. He is resurrected as a soldier of the New Order of Knights Templar by means of reincarnation that was handed down by the Perfecti Cult."

Adler is a high aggression character, wanting to be in the face of his opponent as much as possible to apply as much pressure as he can. Adler has strong tools to do this too, with attacks like 6B having good range and being safe. Additionally, he has strong corner carry, very good corner combos, and decent neutral game. However, for Adler to be pushed to his potential, he needs to be in the opponents face for his best combos to land, and requires a very reactionary playstyle. Furthermore, he can't get anything off his overhead besides 22X OTG damage, hurting his mixups.

Adler wants to try to find a way to get in while keeping up his pressure. This means his neutral mainly involves the use of 236X to cover an approach or slightly pressure opponents in order to cover an approach. Additionally, moves like 6B and 214B are completely safe when properly spaced, and can be used to get chip damage and keep opponents on their toes.

Adler has a very strong but somewhat limited combo game outside of corner. In midscreen, his best corner carry combo is meterless, and doesn't do as much damage as his meter combos. However, as stated, his midscreen meter combos don't carry as far, and you may want to conserve the meter for his corner combos or corner pressure. His corner combos however, are some of the best in the game. He gets tons of damage off them and assured oki situations which he can use to keep up his offensive pressure. This makes Adler one of the most dangerous characters in the game in corner, as he doesn't need much to do a lot of damage in corner.

Adler has incredibly strong offensive pressure, as while he may not be able to combo off his overhead, 4C, his overhead, is even on block, and still poses a threat since he can chain into it from any attack besides a C attack. His two lows are also both pretty good, having decent range. Additionally, 6B and 4B allow him to pressure from a decent distance, making him an active threat at almost all times. Most dangerous however is his corner pressure. In corner, Adler can do a true block string, do 236D, which will hold the the opponent in block, then do another full block string. This allows him to do 2/3 or more of the guard bar, and in many situations, confirm a guard break. This makes Adler incredibly dangerous to block against in corner, and greatly increases his offensive pressure.

Adler has fairly strong oki, as he can shoot a 236C while an opponent is grounded to force the opponent to block and create a 50/50 situation. From here he can go for 2B, 2C, or 4C for a high/low mixup, all of which will setup into another oki situation if they land. Additionally, he can always open up with a landing j.C, which he can use for tick throws or simply a normal blockstring. Additionally, he can setup into a max guard damage block string that he can send into a 236D if a player thinks they can get a guard break.

Adler has rather weak reversal options comparative to the rest of the cast, at least without meter. Without meter, he has no true reversal, and the closest thing is 22A, which doesn't really work as one. With meter, he can use 214D, which is fully invincible on startup, making it a true reversal. As a plus, even if its block its assured to get him out of corner. Finally, he can use A+B+C as one of the best reversals in the game, as its fully invincible on startup, forces the opponent to block, and effectively reverses the situation into Adler's favor. Additionally, if it hits it can lead into one of the highest damaging combos in the game. However, this comes at the obvious cost of all your meter.

Overall, Adler is a character with excellent pressure and excellent combos. However, this comes at the cost of weak defensive options, and while his pressure and combos are great they're not exceedingly strong like Sai. This comes together to make Adler a solid member of the high tiers, with some great strengths but also clear weaknesses.

This is outdated and is in need of an update