This page will deal with one of the highlight features of EN-Eins Perfektewelt: the reflector.

The reflector is a universal parrying move that is executed by pressing B+C at the same time or by pressing D. When this is done, your character will briefly flash blue and a ring of light will appear in front of them. During this time, attacks that strike your character will be reflected. This means that they will not receive damage and will not be in blockstun or hitstun. In fact, your character will actually be invincible to throws as well! As for the reflected attack, it is treated as if it had whiffed, meaning your opponent cannot cancel it into anything. BE CAREFUL: crossup attacks cannot be reflected, because the reflector hitbox is strictly in front of the character only. Reflectors can be executed any time you are in a neutral state, whether you are standing, jumping, or crouching. 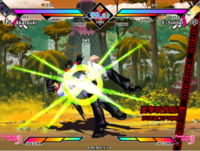 Reflecting melee attacks will cause an auto-counter.

All attacks in the game can be reflected, whether they are projectiles, single-hit, or multiple-hit moves. Reflecting a melee move, such as Akatsuki's 5C or his 22A, will cause an auto-counter. The auto-counter is a preset attack which automatically retaliates assuming you do not press any other inputs. This counter will juggle your opponent for a short time and allow you to continue the counterattack. !!!WARNING!!! The auto-counter may not necessarily beat out a multi-hitting move due to startup, so be careful. 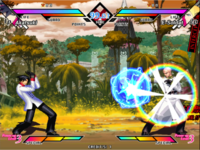 Reflecting a projectile does not cause an auto-counter.

Note that reflecting projectiles will not incur an auto-counter. When this occurs, you are at great advantage because you are free to punish the opponent during the recovery of their projectile animation. Also, be aware that reflecting a move cause a large amount of hitstop. During that time, you can cancel into a another reflector to reflect a multiple-hitting move, or even buffer inputs to cancel your auto-counter into a special attack or a super. This can be done before the auto-counter even comes out.

Reflecting can be done crouching...

As stated earlier, reflectors can be executed crouching as well as standing. The auto-counter you perform is different for jumping, standing, and crouching versions. Since crouching reflectors can catch almost every attack in the game, save for overheads and jumping attacks, they give the least amount of juggle time possible. 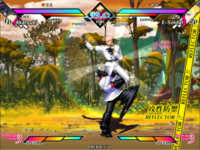 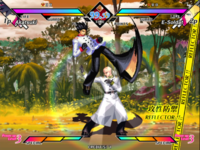 Akatsuki attacks with a shallow j.C...

So far, we have seen that the reflector can be a powerful tool to stop an opponent who is being predictable. However, there is also a way to bait and punish someone who becomes predictable with the reflector itself. This method is the safe jump-in, where you can use a jump-in attack on an opponent without fear of being reflected. 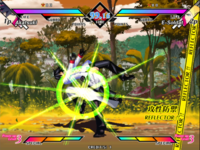 In EN-Eins Perfektewelt, jump-ins can be timed at a variety of heights. Jump-ins which are too early, or shallow, do not incur enough blockstun for the subsequent attack to be seamless. When this occurs, the opponent is easily able to counter with a standing reflector. Even if the opponent blocks, they will be able to counter with a reflector in between hits. Of course, this can be baited but the situation is far from ideal for the attacker, whose momentum is disrupted by this tactic. 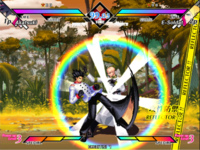 Akatsuki attacks with a deep j.C...

The safe jump-in is when you perform a jumping attack as late as possible, reducing the time between the recovery of your jump and your landing. If done appropriate, you will land first and be able to act before your opponent has even started their auto-counter from their reflector. Confirming this may take a bit of time visually and aurally, but the large amount of hitstop and cues should allow this to be done on reaction with a bit of practice. 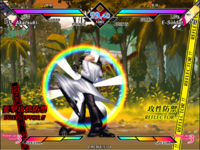 ... which lets him reflect the auto-counter.

The results of this tactic is illustrated here. Akatsuki is able to land first and reflects Soldat's auto-counter, punishing the obvious reflect attempt and continuing his momentum in the fight. Note that you do not necessarily have to do your own reflect. Since you landed, you can do anything that you normally would, such as simply blocking, backdashing, or using a reversal to beat the auto-counter. 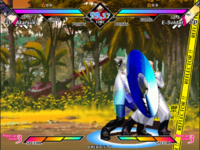 Protecting yourself from the safe jump-in.

The safe jump-in is not without its counter. Since you are able to cancel a reflector into another reflector, you are also able to counter the safe jump-in by doing a second reflector in case your first one is being reflected. Your opponent will reflect at the same time as you, expecting to counter your auto-counter; however, you will be one step ahead with your own reflector. When this occurs, the situation is neutral. Both players have an equal (or nearly equal) amount of recovery time and neither side gains momentum.