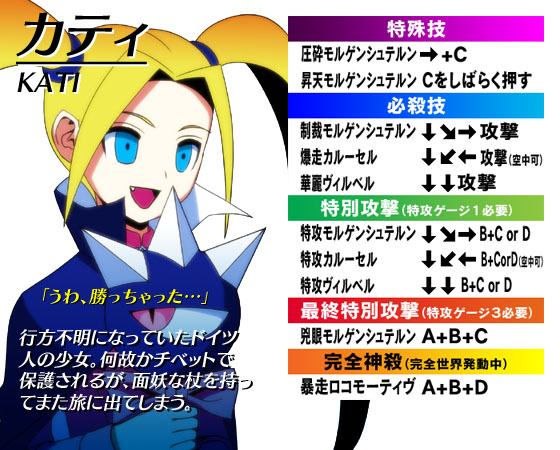 "A German little girl who went missing. She was somehow protected in Tibet and now sets out on a new journey wielding a strange wand."

Kati is an unusual character, that while sounding weak on paper, is among the strongest characters in the game. Kati has good range on most of her normals, allowing her to play well from a distance and get good whiff punishes. Making this stronger is she has ways to convert off most of her attacks, including her 22X due to her EX j.214 being a fantastic move for combos. Furthermore, her 22A is fully invincible and is fast, and leads to full combos, giving her one of the strongest reversals in the game. This does come with flaws though, as she has some of the slowest movement in the game and the worst defense rating. Additionally, her neutral is flawed, as while she has very good buttons, similar to Sai she can struggle at dealing with projectiles and characters better at zoning, and unlike Sai, doesn't have as many tools to get in quickly. Still, she's a character who has good pressure while being hard to pressure against, and a strong combo game to support it.

All damage values below were tested on Akatsuki with 1.000 armor ratio, full life on both sides, and minimum power level (remember about "Health difference", "Guts", and "Power Level" systems)

Kati has strong neutral thanks to her different tools. 5B and 2B are great pokes at midscreen, and both lead to combos, although she needs to be close to the opponent to get her more damaging combos. 236X is also functionally a poke, with each of their different functions having different risks. 5C is a good anti-air range wise, although it doesn't do much besides leaving her plus. She can also take advantage of being able to block out of her forward dash to gain ground on the opponent. On occasion a j.214C can be used to quickly reach the opponent, but this is risky. j.C is also a very strong landing aerial, as well as a good air to air one, making it useful in neutral situations too. Overall she has decent neutral that requires very good balancing of her tools to avoid being punished.

Kati has ok combo game. While she can get good combos from any part of the screen, her combos aren't quite as damaging as other members of the cast, although it's nothing to scoff at. Her main combos involve either canceling 236B or 236C into 22D, or canceling 22C into j.214 EX to extend the combo. Her combos all give a good amount of corner carry, and while it may not be Sai levels where she gets instant corner, it's more than average. In corner, she can use 214B to get stronger combos and better damage. Overall, her combo game, while slightly lacking damage wise, has strong corner carry and many ways to access her good combos.

Kati has ok pressure, with good ways to mix the opponent and some ways to make her pressure safe. Kati has an overhead with her 6C, which can lead to some fairly damaging combos. Combined with 2B and 2C, her lows, she has strong ways to mix the opponent. She can also use 5[C] to catch mashing opponents due to its armor. 5[C] leads to some of her strongest and most carrying combos, making it very scary, as well as being safe on block in most situations. Finally, she can use 214A to make an otherwise unsafe block somewhat safe, although it's still punishable if the opponent reacts quickly enough. This makes her pressure, while not the best, still pretty good.

Kati has above average oki, with once again, her two lows and high making her a threat to block against. 5[C] against a knocked down opponent is also strong, as it'll be mash on wakeup and invincible moves (assuming it isn't a command grab), and even if it's blocked it's fairly safe. She can also add in her throw as an additional mixup. This comes together to give her pretty good okizeme, albeit nothing to overwhelming.

Kati has one of the best reversal options in the game in the form of 22A. 22A, while not being the fastest reversal in the game, is still pretty fast, and is relatively hard to punish for a DP. On hit, she can cancel it into j.214 EX to get a combo afterwards, making it dangerous to get hit by. 22B and 22C have less invincibility than their startup, making them not so good reversal options unfortunately. 22 EX comes out the same frame as 22A while being more unsafe and dealing less damage than a combo after 22A with j.214 EX, making it somewhat pointless to use as a reversal. Kati can also use her level 3 as a risky reversal option, and while it comes out fast for a level 3 and has full invincibility, it's not really worth using due to the cost of using it.

Overall, Kati is a bizarre character that has many strong tools that require good knowledge of how they work to be able to use her at her highest potential. She does very well in every part of the game with the slight exception of neutral game. This comes together to make a stronger member of the cast.