This section contains definitions of terms that are commonly used in gameplay discussions. 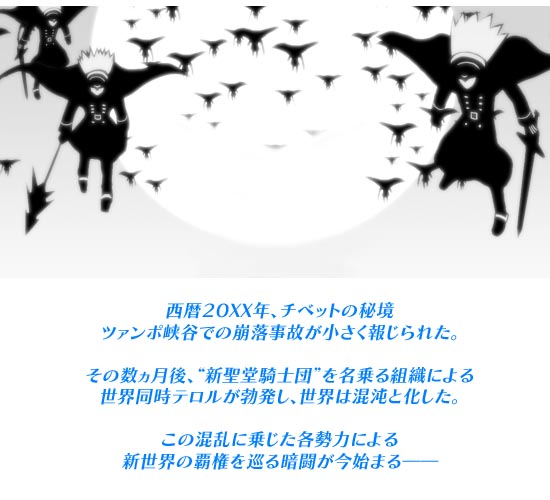 "In Kabuki, the word danmari means also "fight in the dark". It is a pantomime, with actors moving slowly in the dark. There are 2 kinds of Danmari: 1) Sewa danmari: a danmari scene included in a sewamono drama. It is a highly choreographed fight in the dark, with a precious object moving from hand to hand up to the final pose. 2) Jidai danmari: ceremonial item performed as an independant play. In the past, a jidai danmari was a way to present a full troupe to the audience. It is a large-scaled pantomine made up of a succession of kata performed simultaneously by several actors, with a music accompaniment but without any dialogue." Taken from [2]

The terms here describe only the game's background story, and are in no way related to gameplay. Corrections are welcome.

Ancient cities where human-like entities known as Gods once lived. Possibly the origin of the Blitz Motor.
Agartha was said to be a subterranean kingdom that was located under the Himalayas in Tibet based on the theory of a hollowed Earth, and was supposed to hold immense wisdom and wealth. [3]

The mcguffin of the ABK series. Some kind of engine that can be installed into equipment and people to give them super human abilities. Powered by ATP [4], causing it to shorten the lifespan of those with one built into them, with the exceptions of the perfect Blitz Motors. Supposedly created by the Ancient Gods that lived in Agartha/Neuland.

Term used to refer to the ancient being(s) that lived in Agartha. Possibly the original creators of the Blitz Motor, and considered to be a more evolved version of humans by the Perfecti Cult. EN-Eins is apparently cloned off of a God. It's likely that Valkyria is one of these beings.

A secret religious society founded by Mycale in Southern France during the 12th century. Its main goal is the salvation of the souls of all of humankind by destroying their physical bodies, a plan called the Pneuma Project - プネウマ計画 (Pneuma Keikaku). To this end Mycale and the Cult have been shaping the most important events of the world's history since the Middle Ages. Gesellschaft's base in Tibet, the discovery and producion of the Blitz Motor, the creation of the clone soldiers and the worldwide attack of the New Order of Knights Templar are some the means towards that end.
The Perfecti Cult is heavily based on Catharism in many of its principles and beliefs. Originated in Southern France (the Languedoc region) in the middle of the 11th century, Cathars believed in two gods: one the good god, the creator of the spiritual realm and the other an evil god (refered as Satan or Rex Mundi) creator of the physical world. [5]
The spirit was of utmost importance to the Cathars and the body and the world were considered tainted by sin. In order to ascend to the spiritual realm one had to renounce the material self completely, until one was prepared to do so, their souls would be stuck in a cycle of eternal reincarnation, condemned to live on the corrupt Earth.
These beliefs were considered heretical and the antithesis of the Catholic Church which led to the Albigensian Crusade (1209–1229) initiated by Pope Innocent III to eliminate Catharism in Languedoc. This was followed by the instauration of the Inquisition that completely eradicated the Cathars in 1350. [6]

Term used to refer to those in the Perfecti Cult who mastered the principle of reincarnation and can resurrect in another person's body. Mycale as the leader of the cult is one these beings. It's stated in the story that even though Murakumo and Adler can resurrect they haven't reached this status yet. They are still tied to their bodies since they can only resurrect by transmigrating to their respective clones unlike Mycale who can do it freely.
This title is based on the similar one used by the Cathar religion in the Middle Ages. Those who followed a lifestyle of extreme austerity and renunciation of the world were considered "Perfect". The Perfecti were the Cathar spiritual elite, highly respected by many of the local people, leading a life of austerity and charity. [7]

Mycale used the Third Reich's Ahnenerbe (named Gesellschaft after the war apparently) to conduct research and development to further the Perfecti Cult goals. Ranging from building a base of operations in Tibet, the excavation in the Tsangpo Canyon to uncover Agartha and the Blitz Motor, the clone soldier project that gave Gesellschaft its army of Elektrosoldats, the creation of the living weapon Blitztank, and the infiltration of the Asian governments and organizations by Murakumo clones among other things.
Led by Murakumo, they were the main armed forces of the cult until the destruction of their base in Tibet at the hands of Akatsuki according to EE story.

Led by Valkyria, the order is the new armed forces of the Perfecti Cult replacing Gesellschaft after the events of ABK/AA with its main base located in Antarctica in a city similar to Agartha named Neuland. It still retains many of the weapons developed by Gesellschaft including the army of Elektrosoldats and Blitztank as its main forces along with the new flying troops called Tempelritter (Temple Knights) cloned from Valkyria.
It's unclear if this organization has any relation to the original Knights Templar that were active from 1119 until its dissolution in 1312 under charges of heresy. [8]

Akatsuki, Fritz, Murakumo and Dà Wèi use 複製體 (fukuseitai) throughout the series to refer to the clones produced by Gesellschaft (e.g. Murakumo clones, and Elektrosoldats). This term doesn't have a direct translation: (1) 複製 (fukusei) reproduction; duplication; reprinting (2) 體 the body; substance; object; reality. The common term for clone in Japanese is クローン which is what Adler, Elektrosoldat, Perfecti and Valkyria use. It seems to imply that the Japanese in this setting didn't get to use a loanword for the term for some reason. The same is true for Chinese which uses an equivalent loanword for the term (克隆 kè​lóng).

The leader of the the Black Hand mafia. This title is spelled in Chinese from 大 (dà)​ big; huge; large; major; great; older; eldest and 当家 (dāng​jiā) 1) to be the one in charge of the family; 2) to call the shots; to be in charge. This position was first held by Yin Xu in ABK/AA and now by Marilyn Sue in EE.

This organization seems to be a mixed bag of many different religion references: the palace could refer to St. Peter's Basilica in the Vatican City [9]; the name is very similar to the Holy Club which was the foundation of the Methodist Church [10]; they use specifically 異端審問 [11] (Itan Shinmon - The Inquisition [12]) to refer to Anonym's position within the Holy Club; Anonym's orders in ABK/AA are stated to come directly from the Pope; and considering reincarnation a sacrament which are a fixed number of rites in most religions that have them, the only exception being the Eastern Orthodox Church with the notion of Holy Mysteries.

This is a direct translation from the official ABK site taken from the section Words which details the meaning of various terms used throughout the games. The bullet points below each give further explanation if needed.

During the Great War, submarines were used to carry out Japanese-German technology exchange. Before the outbreak of the war the "Indian Ocean - Cape of Good Hope" route was used, but during the closing years of the Great War navigation was near impossible.

The technology used to control metabolism and lower body temperature. It also improves the immune system.

Codename originated from "Akatsuki Unit" which was the alias of an Imperial Army naval force.

"The Shipping Command Unit (Senpaku Shireibu Tai) was an organization of the Imperial Japanese Army that supervised the transportation of troops, goods, etc. during the war. It was assigned the Unit Character Name: "Akatsuki Unit". More popularly know as "Akatsuki"."
The Imperial Japanese Army gave codenames, based on a guideline called Tsūshōgō [17], that assigned a character (kanji) and a number for each unit. In this case 暁 meaning dawn, daybreak.

Its real meaning being closer to "Society". It originates from "German asociation for the spiritual inheritance of protohistoric ancestors" to be commonly referred to as "Ahnenerbe".

An unregistered illegitimate child not declared for being born outside the one-child policy.

Taking advantage of Hong Kong handover to mainland China, the local mafia expanded into the continent. The origin of the name comes from its assassins black gloves. It's unrelated to the Serbian Black Hand Society. [19]

License given to the strongest agents authorizing homicide.