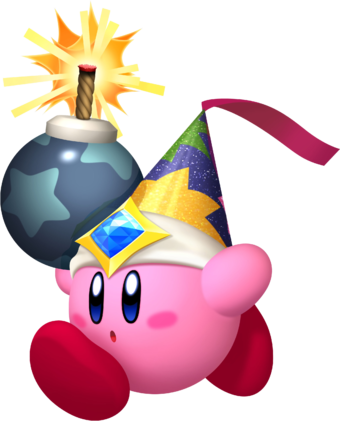 The Bomb copy ability is one of, if not the most versatile characters in Kirby Fighters 2. Each of Bomb's tools are deceptively simple, allowing you to create your own path to victory with the opponent as your unwilling canvas. At any one time, Bomb can threaten almost the entire screen, keeping the opponent in a box with brutal setups that let you easily control the pace of a match. Bomb does best in situations where the opponent is forced to approach, as it's one of the best characters at keeping the opponent out. However, Bomb tends to struggle against characters that can beat out bombs with projectiles/disjoints, or characters whose gameplay doesn't rely on approaching at all.

Bomb generally wants to wall the opponent out, claiming stage control until you have the opponent cornered with nowhere else to go. Aerial Bomb Bowl (66 > j.B) is what you should mostly be using at long range, but it can be used at any range due to how fast it is. Grounded Bomb Bowl (66B), normal throw (5B), and any angled throws (5[B]) are great at mid range, and at close range using Bomb Set (2B) or Bomb Drop (c.B) is great, both aggressively and for getting out of the corner. Feel free to get creative with combinations of bomb setting, bomb bowling, and angled throws, which can have devastating effects if spaced correctly.