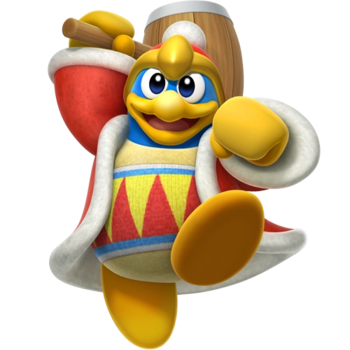 
King Dedede is the self proclaimed king of Dreamland and comes to battle wielding a trusty hammer. The king comes equipped with a moveset similar to Hammer Kirby but trades size and speed for reach and power along with 3 more moves and an extra 30 health. The main gameplan of the king to get in close and use his disjoints to keep his foes trapped in a corner and deal massive amounts of damage before they can capitalize on his slow movement and large hurtbox to take him down.

For information about King Dedede's other Kirby appearances: https://wikirby.com/wiki/King_Dedede

First and foremost, Dedede is pretty much a glass cannon, taking and dealing high amounts of damage. Generally, your dash options will be your best bet due to their fairly quick startup (In terms of Dedede) and combo potential. Those being 66b, 668b, 662b, and 66j.b. j.b works as well. Your main focus as with any character, but especially Dedede, is to get into advantage state. Be patient, and wait for the right time to strike with any one of the moves listed above. Dedede excels at corner combos, and several of his moves can shove his opponents into the corner. If you ever find yourself out of disadvantage, you NEED to get out quick, you will take heavy damage if you don't. In terms of other moves, 5b is barely used due to its low mobility and damage, 2b is good, but mostly reserved for corner combos, 8b is seldom used due to its high startup, but can occasionally be a good high damage anti-air/plat, and 28b is also a great anti-air, and also can be used in combos. As for combos, we have a list of them that will be updated regularly. (Keep in mind some of these may be escapable with DI, but for the most part they're good, or can be used as mixups)

All in all, you'll want to do whatever you can as dedede to get advantage and avoid disadvantage. Play safely, but don't be afraid to get brash sometimes. Try and force your opponent into a corner, and get some mean damage on them. The 30 extra health you start with generally doesn't matter in the long run, so don't act like it makes any difference.

Dedede already has his crown, what other hats could he possibly need?