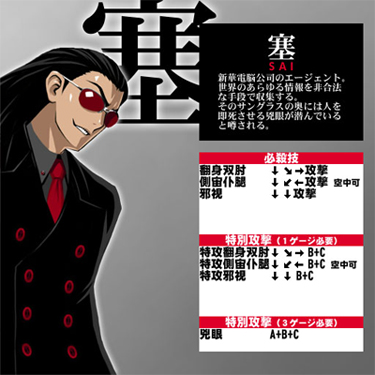 An agent of the Xīn​huá Computer Company. He gathers all sorts of information throughout the world by illegal means. It's rumored that hidden behind his sunglasses there's a wicked eye that can kill a person instantly. (from character selection screen) 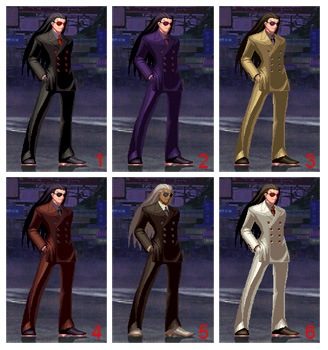 Sai, the secret agent with an eye that can supposedly kill a man with one look.

Sai is a strong but flawed member of the ABK cast, with some great normals and combos, but also an exploitable neutral and few options on wakeup. Sai's normals boast great range, and his mixups are some of the best in the game. In addition, he's very good at pushing his advantage, and has many meaty options. Making this stronger is his above average combo damage, and the ability to carry an opponent from one corner to the other with one bar. However, a lack of anti-airs makes dealing with jump ins difficult. In addition, a lack of a reversal without meter makes wake-up situations very dangerous and difficult. Still, good use of his 236+X and 214+X can make getting in much easier, especially with 236+C being even on block, and having meter gives him access to 214+B+C, a weak but still useful reversal.

In neutral, Sai has to take advantage of the range of his normals, such as 5B, 2B, 5C, j.A, and j.C, and take a combo off any of these whenever he can. In addition, Sai can occasionally throw it 236 or 214 to catch an opponent off guard or get a more distant whiff punish. However, it can be dangerous to just throw out these moves, especially 236C, since sometimes you can run straight into a projectile and are forced into a block string. To avoid projectiles, Sai can use aerial 214 to quickly gain distance to where his opponent is, and if it hits, force the opponent into an oki situation. However, relying too much on aerial 214 can become predictable, and is punishable.

Sai has above average combo game and some of the best corner carry in the game, with midscreen combos that can go from corner to corner. However, all of his better combos require at least one link, and his harder corner combos can have as many as 3 links in one combo. Luckily, Sai has a number of ways to open up opponents for these combos.

Sai has a number of ways to open up his opponent in a block string. 2B, a low, and 6B, an overhead, can both be chained into from other moves, and can both be comboed from. If you're unable to open them up with a normal, Sai can cancel into 214 to catch an opponent of guard since it's an overhead and gives Sai an oki situation. Additionally, Sai can cancel into 22, and since it functions as a standing grab, it can catch an opponent off guard and give them a debuff. These all make being in a block string against Sai dangerous if the Sai player knows what they're doing.

Sai has fairly strong oki options by mixing up the following moves.

2A -> walk forward and throw

2C is unsafe on block, but launches if it hits early and can be comboed from. 5C can then be considered a much safer alternative, as it serves the same purpose. However, against some characters 2C and 5C should be mixed up regardless, as the character may have a way around one or both, such as Akatsuki's 214+A/B/C going over Sai's 2C.

214+B+C serves as both a reversal and an anti-air. A+B+C can sometimes be used as a reversal, though there is an obvious risk involved, as it requires all 3 super bars. In addition, its startup is slow enough that an opponent is capable of throwing out a jab then jumping to avoid getting hit. The lack of a true reversal makes Sai's ability to deal with pressure weaker than other members of the cast, and demands much more of his player's ability to predict what his opponent will do during oki.

Overall, Sai is strong character with lots of mix-up options and an above average combo game that makes full use of his kit. However, without bar, his ability to deal with an opponents pressure, especially in corner, is weaker than the rest of the cast, and his neutral, while not terrible, has its weaknesses. Still, Sai's pressure and above average combos make him one of the stronger characters of the cast, albeit one with his fair share of weaknesses.

A video demonstrating most of Sai's basic combos.

If you don't have meter or don't want to use it, remove 236+B+C/214+B+C super at the end of these combos. However using this super as a finisher leads to very solid damage (around 4000 or more in most cases) and will most likely put your opponent in the corner.

The 2B after the 5C requires a bit of timing, but nothing overly difficult. You can replace the 2B juggle hit with 2A if you're having trouble and the combo will still work.

A shortened version of the one above.

The standard combo off the 6B overhead.

A more damaging combo after the overhead that requires 2 meters. This combo only works if the opponent doesn't end up too close to the corner.

A combo generally only used on a whiff punish with 236C. You may want to delay the 236B input since doing it to early will make the first hit of 214+B+C miss.

Some of the few ways to successfully combo into his lvl3. However, the damage is severely scaled down.

Most of these juggles can be finished with both supers, 214+B+C does as much damage as 236+B+C but will rarely connect all hits at the end of such long combos. If you want to ensure good damage, it is better to do 236+B+C because it will connect almost all the time. Getting full damage with 214+B+C requires a perfect timing.

A meterless corner combo that does decent damage.

The basic corner combo off the 4C launch in the corner. If the 236B near the end hits too early, then some of the hits from 236+B+C might miss. For a more reliable method to get all the hits from the 214+B+C to connect, omit the 5A after the 236C.

Similar to the one above, same rules apply.

4C is quite hard to hit confirm from 2B because for some reason, if you do it too late 5C will come out instead (but by chance it still connects). The 2 following combos can be used if you missed your hit confirm into 4C or if you want to make things easier, they still deal good damage anyway :

A combo off the 6B overhead in the corner.

A combo you can use with a whiff punish 236C, or just by managing to hit it in corner.

A combo to use if you're able to whiff punish with 236B in a corner. Can be a little tight to land the 2A but it's easier than some of Sai's other combos. 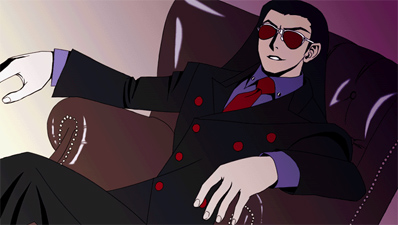