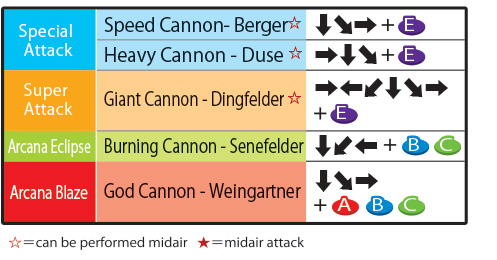 With Fenrir from Norse Mythology as the motif, Baldur is a holy spirit that has been fit into a mechanical armor.

Baldur - Baldur becomes affixed in the place that you activated EF. This makes the start up of all of Baldur's moves faster and guaranteed to come out.

【Notes】
You can use all of Baldur's moves in the air, however he will always appear on the ground to attack.

E
Baldur's main cannon fires a shell at high speeds straight forward. If the shell is clashed, it will explode shortly afterward; this explosion actually does more damage then the attack would normally do. If you hit with this move very close to the opponent, you can usually pick up the hit for a combo without having to use any meter.

E
Baldur's grenade launcher fires a shell upwards like a mortar. This will explode as soon as it hits the opponent and damage them. This is unclashable.

E
Baldur's CIWS fires diagonally upwards. This is unclashable. Rather than damage, you usually use this to catch the opponent in the air and restrain them by forcing them to block.

E
This is the super version of Spread Falke. The number of rounds fired and the range of the move increase. This usually ends up missing most opponents if they are right next to you so be careful.

E
This is the super version of Speed Berger. When the shell hits the opponent, it will explode. The second hit of the explosion will guard crush a blocking opponent.

God Veingartner - Baldur fires a giant laser diagonally into the air, it fills almost the entire screen and does great damage. The only and greatest flaw of this Blaze is that it hits way too many times. If they block or even get hit by this, you end up giving them a rack of meter for them to use against you. You end up giving them so much that you're probably better not using this at all as it's not worth the damage/chip damage you do in exchange.