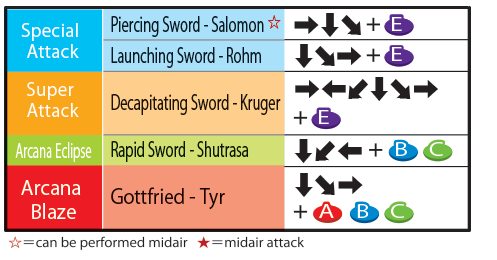 With Tyr from Norse Mythology as the motif, Gottfried is the god of war outfitted with mechanical armor by Drexler.

Speed Rutschen - Depending on the number of times that you activate your Extend Force, the amount of time that it takes to fully charge your E moves will shorten. A pretty plain passive attribute, unfortunately it takes way too many activations to really feel the effects...

Strength Feder - Again, depending on the number of times you activate EF, a couple of properties of your character and arcana will be strengthened. To be specific, the duration of EF, the recharge time after EF, and your attack and defense power during EF. These buffs will also be carried between rounds. It is best to think of it as "points." If you EF or EFC, you will gain more points. You can have a maximum of 20 points to help buff the aforementioned stats, an EF will give you 2 points, an EFC will give you 1. You'll often find more zoning-oriented characters activating EF whenever they can in order to very quickly gain the buffs from Strength Feder.

E
Gottfried will fire a blade towards the opponent. This move is very slow on start-up but is a very strong projectile. It's fast, cannot be neutralized by other projectiles, and non-reflectable. The recovery is also good, but you can't shoot these out repeatedly.

E
Your character will rise into the air a bit, then charge into the opponent with Gottfried. Usable in the air. The start-up is a rather slow, but you move forward a good bit, there is almost no recovery, and if you make the opponent block this you get some great frame advantage off of it. It will wall slam on hit and is easy to combo into and out of. This is a plain but good move all around. Good for blockstrings, combo enders, mid range spacing and more.

E
Gottfried appears right next to you and slashes upwards. This is air unblockable and will launch your victim upwards, making it easy to combo off of with neutral homing. This sounds great but the move is too slow to be easily used for combos or as an anti-air.

E
Gottfried appears in front of you and slams his sword into the ground, creating a wall of lightning behind you and your opponent. In other words, the closer you are to your opponent, the smaller the cage of lightning will be. Regardless of who touches this wall of lightning they will be caught in it and take damage. Yes, that means even the player using Tyr can take damage from it. To be specific, the blue lightning attacks your opponent, and the red attacks you. The blue lightning is more towards the interior of the cage, so there are a lot of times where you get hit by your opponent, but get saved buy the blue lighting attacking your opponent. As said before, size of the cage depends on the distance between you and your opponent. This move owns the fat characters (Kira, Cathy, Nazuna) up free as it's very hard for them to do anything about this move. The start-up after the superflash is the slowest out of all of Gottfried's moves, fortunately the move is guaranteed to come out no matter what. Even if you get hit, you'll start your caged death match with the opponent. The damage is somewhat small, but this move is mostly to restrain your opponent's movement, plus there's situations where it can be comboed off of very easily. While Gottfried's sword is out, you cannot use any Tyr moves (not even the Arcana Blaze).

Strength Gottfried - This is like a super version of Kruger. The start up is way faster than Kruger and is still air unblockable. The second hit, the part where Gottfried rises up guard crushes. This is more useful than Kruger but its still an Arcana Blaze, so it's not like you just go for this whenever you want. It does pretty good damage so you can at least use it as a finisher.