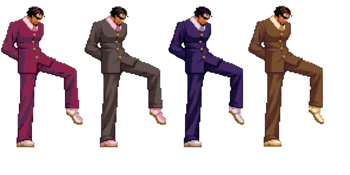 Perfect footwork and equipped with kicks that have several miles of range.

Olof is the bodyguard of Princess Sissy. He is asked to enter the tournament for her pleasure, to test himself. Even though one of his arms is wounded and bandaged, he is powerful enough to defeat opponents with only his legs. He is often calm and reserved, and he is very chivalrous toward women.

Olof is a character who bases his gameplan on a "Hit n' Run" playstyle. Olof specializes in baiting the opponent's approach to open them up for damage.

Note: Despite the appearances, none of the Olof's standing normals can be crouched.