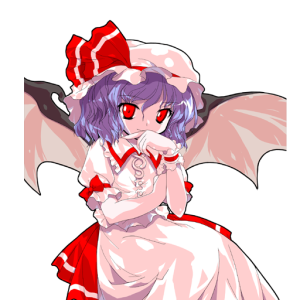 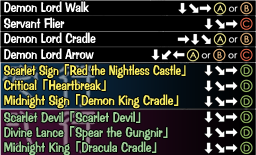 Remilia Scarlet, the Scarlet Devil with the ability to manipulate fate. In the game of IaMP she is nowhere as powerful but still ranks among the stronger of the characters due to her aggressive moveset and high speed. With the ability to airdash three times instead of two and a special ground dash that leaves her bereft of graze attacks, Remilia's playstyle may be familiar to those who play other fighting games and is simple yet effective in the context of IaMP.

Remi's bomb is unique in that it "hits" before resetting point items, meaning all bullets converted by a bomb hitting are counted towards your point item stock when you bombed. If you would gain enough point items from this to gain another bomb, you get the bomb item which will then collect after consuming your current bomb. If you convert enough bullets, you can even get two bombs back with one. This puts extra emphasis on keeping count of your point items, as Remi is also highly reliant on bombs for a big part of her gameplan.

Remi might be your character if you enjoy being annoying and hovering just out of range, going (and walking!) really fast, don't mind a bit (but not too much) of an execution threshold and feel like a few extra lessons on bomb economy. Remi's combo execution is mainly adjusting juggle timings and heights, while her corner pressure loop demands a lot of very tight execution and frame perfect cancels, however it is not absolutely essential to her, and straight up does not work in some matchups.

Tier wise, Remi sits squarely outside S tier, just below the top three. She has drawbacks, severe ones even, but is overall strong enough where it matters to be able to play around them.


Remi's actual combos are fairly simple, and can be divided into two core routes:

Basically everything goes into 6A 236A and it's what you'll usually take if you can't get the DB loop instead. You can hitconfirm into it from 5A or 5AA if you're close enough, and will be your grounded route of choice.
The DB loop is what you want and what most of your damage will ideally come from. The trick is pressing B after the peak of your dash, so that only the first hit gets to come out so the second hit doesn't knock down.
Keep an eye on your opponent's height and delay your first few reps accordingly, j.B(1) has enough hitstun to afford this. You can go for more than 4 loops, but at this point you can't properly transition into 6A anymore.

5B Pickup
You can transition your DB loop into 5B 6A instead of just 6A for about 400 free damage on certain characters. For most of them, you'll want to delay your 6A, sometimes by quite a bit, because of how much 5B pops up.

Marisa, Meiling and Patch do not require delaying. Does not work on Suika or Yukari. Can work on Sakuya in theory but very tight, not even worth the effort.

In case your 236C string actually hits. If 6B hits in the corner, instead hjc directly up. If 236C hits grounded, you can link 5A 6A 236A afterwards. Bombing is usually not worth it after, since the bullets destroy damage and hitstun scaling.

236A CH has a big untechable bounce but surprisingly bad starter proration, so you can't actually properly DB loop from it. You can still milk it for the proper 3k by doing a single DB, then going directly into 6A 236A and bombing instead.

Enders
These are all possible enders for the combos listed above.

(air to air) 6DB (walk forward) 6B (pause) 623B: This is the alternate to the 6DB loop for situations where Remilia is too close to the opponent or the opponent is too low for a 6DB loop. Timing is tricky at first for the 623B to land, just remember to let the opponent fall further to the ground if your 623B is not landing, and to do 623B as Remilia retracts her leg from the 6B. Done properly, you will be at a slight disadvantage if the opponent techs but will be able to block and backdash their retaliation. The damage is a compromise between her normal 236A BnB and her 6DB loop but has the advantage of being her only BnB that doesn't require a bomb.

While Remi's design initially screams rushdown, and she's definitely not uncomfortable at point blank, she has issues sustaining any kind of credible close range threat that isn't her corner loop. While both 6B and 5B grant you a heavy spirit damage high/low, 5B is 10 frames, requires you to be point blank and isn't cancelable into, giving precious little incentive to low block due to needing to walk up and 5B raw, which isn't exactly the safest option.

What she does excel at, though, is being very annoying and disruptive just outside poke range. Her fast but fixed movement gets to shine here, as do tools like f.2A and glide j.B, as well as strong counterpokes like 2A and 2B. The biggest weakness to her DA, the ability to dash/walk under it without issue, is also mostly gone at just tip range.

Further than this, her f.A series is also very annoying and very good at catching your opponent setting up bullets, either forcing movement or getting you more sweet, sweet point items. It's also worth noting that doing a rising jf.A as early as possible naturally leaves you at a height where your second airdash will glide for almost its whole distance, which is great. Just remember that jf.A requires you to be way further than a grounded f.A, so you don't do a random rising j.A and kill yourself.

Eating a bullet during the superflash of either Cradle spell will cause everything else to freeze accordingly, but Remi herself can move freely until superflash ends.
This opens up a lot of potential opportunities to either escape pressure or even punish certain bullets on hit. There are four major points to be aware of if considering this:

Landing during airdash momentum will cause you to slide across the ground for a fixed distance in a sort of freely cancelable graze state.
You can freely block and do grounded moves at any point during this state, giving Remi an actual sustained grounded graze option, which she otherwise sorely lacks.
You are however, for all other intents and purposes, still aerial. You still cannot block air unblockables, and being hit will act as if you were air to aired at that height. Beware of good air to air conversions.
Canceling this state in any way forfeits your graze, so make sure you actually go through whatever bullets you aim for with it first unless you actually want to eat them.
Remi will high profile a lot of very low hitting moves while gliding, meaning moves like Yuyu 2B will whiff completely. Just make sure you dodge the whole move before pressing a button and forfeiting your glide state.

Remilia's HJC rushdown works the same as anyone else's, but is distilled down to very simple, effective strings that do deceptive amounts of spirit damage. Your pressure is largely enabled by the constant threat of 236C loop and your strong stagger high/low game. Remi is good at traditional stagger pressure and frametraps, but knowing the actual threats in her offense will help you understand how to actually catch people doing stuff with it.

What you get damage from

These are your prime threats. You're either looking for these or to enable enemy escape options that lose to these. Remi is unconventionally good against jumpouts and weak to more horizontal escapes, so keep that in mind.

What you get knockdowns from

Options that don't lead to significant damage but reset the situation. Knockdowns are precious to Remi due to her crippling bomb addiction.

Things that are not scary

These are the options any defending opponent wants to limit you to. These lead to either piddly damage or acceptable damage but very awkward airtechs/knockdowns out of the corner and not on your terms.

Overall, your threat of damage is at its most awkward around halfway to 6A's max range, as none of your usual grounded starters combo properly anymore, you're too close to reliably dash reset and slower, longer options like 2B and 236A can theoretically still be mashed out. j.B, high reward as it is, is also very narrow, only beating jumping and doing nothing at all to any other option. At closer ranges you can threaten a lot, and at slightly longer ranges you have lower commitment options like f2A open, you can do dash jumpins without cornering yourself free and you're not at immediate risk of taking damage.

As mentioned above, Remi has a technically airtight, but very difficult spirit positive corner loop. Airtight on almost the entire cast, does considerable spirit damage, and is spirit positive, meaning you can crush with it fairly well. Actually connecting a point blank 236C isn't the most realistic thing, however it is airtight off any heavy (type C) normal, namely 5B/6B, which also adds an additional chunk of spirit damage on wrongblock just in case.
You absolutely have to be point blank so the spears hit instantly as they appear, without needing to travel, to be airtight. The hjc needs to be done ASAP as does the j.2C. How tight j.2C is depends on how tall and/or fat the opposing character is. For this reason this does not work on Meiling and is a one frame timing against Youmu.
Characters by degree of difficulty: Meiling (can never work) > Suika > Youmu (1F window) > Yuyuko > Sakuya > Reimu > (Marisa, Alice, Remi) > Patch > Yukari (almost easy)