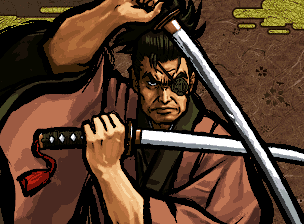 Depth perception is for wimps.

Defined by having catch counters, long range pokes, fast ground speed, so-so specials, strong chipping potential, and a pretty lousy jump, Jubei is a well-rounded zoning oriented character with strong active defense that takes some guts to play effectively. He uses his strengths to makes his opponents not want to sit still or take careless guesses, and takes advantage of that.

Lots of starters for light hits, which are all comboable. This gives Jubei a wide variety of fast punishment tools, though 5A and 66A are the fastest.

Works at most ranges, resets to neutral.

For spacing, resets to neutral.

This works from surprisingly far away, almost the full range of 5B. Great for punish combos.

Have to start from close range for both hits to connect, for the 2BC followup you have to backhit or be near the corner. Good knockdown option, though.

Near corner. Sadly, you can't 8BC even on antiair.

Second hit combos into 8BC easily enough, you can confirm if you want to off of the first hit and go into something else otherwise.

If you ever use this, you can get a little bit more damage.

Very tiny amount of extra damage, but you take what you can get.

Nice damage boost if they get hit by it. Plus, you can't rage explode the 236AB so it's a guaranteed finisher.

For that extra little bit of hurt.

If you can't wait for them to come down to Issen.

Jubei's a strong footsies character, his mixups are not terribly great but he's good at making the opponent very edgy. You have a fast dash speed but poor dashing attacks, so use sparingly or against jumpers. Your long poke range makes it easy for you to just walk in and out of the opponent's range safely, or to make him walk into your attacks.

Watch the opponent's patterns carefully, your catch counters are terrifyingly strong if you land them, so if they're mashing pokes or predictable specials feel free to make them stop forcefully. This is best used against grounded attacks, rather than jumpins, since good players will watch that approach carefully. As good as your catch counters are, don't forget that you have a normal deflect, and that it is a lot safer than them in most scenarios.

Use whiffed 623A to catch attacks or to fake out into another mixup. Learn the range on it well!

Learn the 5B/2B 623S combos and the ranges at which they work, they are very strong punishment tools when available.

236A is incredibly obnoxious and outside of minimum range is incredibly difficult to stop. Be careful since they can hop it on reaction. Mix it up with 236B for faster recovery.

236AB is good for forcing them to jump or block, since some characters can't hop it and it beats most other projectiles clean. Be careful that you're not in jumpin range during startup, though.

5BC is an amazingly long range overhead that is really difficult to punish when spaced, and can function as a poke in a pinch. Plus, you can mix it up with 6C 8BC, which is a very fast low hit with solid range and cancelability.

He is pretty slow to rage, but rages for a relatively long time as far as this game goes. It's pretty easy to find room to charge for Issen but his damage can get serious and that 18 seconds can feel like forever when he's on the offense. Gauge which way fits your playstyle and strategy better.

Jubei has a few ways of punishing for solid damage: