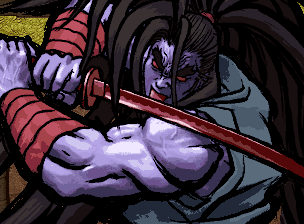 Shadowmaru; the leader of B.L.O.O.D.M.O.S.E.S., and the enemy to b-ball players worldwide. Has 10 points in Dunk.

Rasetsu at first glance looks like a weird version of Haohmaru, but he plays completely different. The first thing you notice is that his 5AB is not amazing. The next things you see are that his WFT is ridiculously awesome and he can combo all his pokes into it. Because of this, he is extremely scary when raged. The only problem is that he has about eight seconds to make good on this. Outside of basic potatoes gameplay he's got a few oddball gimmicks and is stellar at bullying the opponent when they have no weapon. Disarming your opponent is Rasetsumaru's endgame, so sneaking that WFT in whenever you can is important.

Works at all but the furthest ranges, does about a throw's worth of damage. Really nice.

Easy way of comboing into WFT. Landing random confirmable shoulder is always a good way to get this off.

The second hit of n.5AB is cancelable, and combos right into 623C. This is his most damaging combo starter, so get to it.

Works even at the maximum range of the attacks, which makes all of these great tools. 5B hits really far, 2B is difficult to low profile, n.2B starts up almost instantly. Punish accordingly!

Does more damage than the 623C 8BC followup, but can only be used at close range.

Tornado has full juggle, so you can follow it up with all kinds of stuff.

This does the most damage, though it's difficult to time.

Doesn't hurt as much as 5AB, but sets you up for a reset mixup on landing. Works on all distances - preferable follow up.

About the same damage as j.AB, forces knockdown.

Timing is harder, but does more damage.

Standard knockdown into followup. Does more damage than you would expect.

Standard followup on a far catch (i.e. only works if the opponent is launched straight up rather than away).

Fancy unarmed combo. Without 8BC/2BC you are free to get sword back.

The usual for when you can't wait for them to come down to get Issen'd.

Sets up a non-explodable combo. Handy but you probably won't have much charge for it.

Sets up a non-explodable Issen combo.

Classic. You can do some more 66A reps but timing is very strict and at max range 236CD wont combo.

Rasetsu's core game is based around his rage meter. When not raged, he's a pretty okay zoner with poor antiair options, that can hitconfirm random pokes into good damage and knockdowns. With it, those random pokes become combos into WFT and he can punish more or less anything he blocks on the ground on reaction. For this reason he has trouble building up meter for the Issen gauge, but that doesn't really matter.

5B and 2B are the two pokes you will want to be throwing out constantly. Both of them combo into 623C, which in turn can combo into 8BC or 236CD. Learn this combo, learn the ranges, and fish for it any chance you get.

623C is pretty much godlike. If you throw it out at maximum range it gets Rasetsumaru in safely and is basically safe on block to all but the fastest attacks. It also goes over 2C spam. If you're near the corner and feeling gutsy, you can follow up a hit with n.2A to reset them for a throw mixup.

His counter move, 623S, works a little strangely. It doesn't catch the weapons themselves, it catches their outstretched body, so they can walk into it and be hit. There's a small period of upper body invulnerability, but it doesn't last all the way until the catch period, so be careful. When it connects it switches to the attack, which is fully invincible on startup.

His WFT is pretty much the best in the game. Startup is jab speed and invincible, catches from far range, can't be rage exploded. Punish anything with it, catch any obvious approach with it. But most importantly, combo into it from 623C off of random pokes. However, its hitbox makes it poor antiair, so don't try to catch them carelessly.