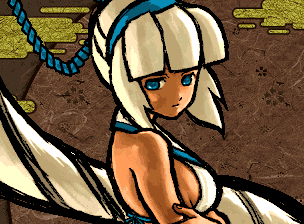 Mina and Chanpuru, both masters of annoying their opponents to death.

At first glance, Mina looks like a zoning character. This is wrong. She's much more of a high risk, high reward style. Very high damage, very low health, good mixups. Her matches tend to end up with one player or another having most of their health left, since whenever she's wrong she tends to lose half of her lifebar right then and there. Because of that, she's not very good at winning in a consistent way as she's very high variance character. You're going to have to get used to that if you want to play her.

All of her best zoning tools can be reacted to easily if the opponent is simply walking instead of running or dashing, meaning they're only really good for running the clock down. On the other hand, she can shut all jumps down on reaction easily and her mixup game is strong, very able to force the opponent's hand when she's being aggressive.

Near corner only. This is going to be the heaviest damage option when it's available.

Near corner only. Works in more situations. Sometimes you can do ... 66 4 2BC to dash up, come to a quick stop, and then do it.

Opponent near corner only. This does very little damage and is kind of a waste of a sky arrow, but when you need that extra little bit of damage it helps. If you're in the situation to use this, you're probably better off just charging another arrow with 421A instead.

Skyfall arrow combos into basically everything, making this an ideal punish for anything that's stationary and not too fast. It being overhead also helps a lot, since the extra stun against a crouching opponent makes it easier to link Mina's heavies.

If not crouching, close range only, otherwise about half screen range works. From here, the usual knockdown followups work. This is Mina's strongest combo.
When 421B connects in the air, you can actually juggle into 2AB if you do it immediately!

Surprisingly long range, knocks them far back. 2BC followup only works near the corner.

Works at any range. Since it's a high followed by a low, it's hard to block correctly when closer up.

When you can't follow up with anything else, for a bit of extra damage. Usually a waste of arrows.

Almost simultaneous high/low. Very hard to block, knocks down and does good damage if it connects.

Like the last one, very difficult to block. Great for a tick throw setup if they're not expecting it, and it's also very fast to recover.

At close range, this is unblockable and does a small amount of damage, but be careful about them jumping.

If for some reason you actually connect the charge move, you can follow it up for more damage.

This is the best option since it's the easiest and combos into basically everything else.

Works from all but the furthest ranges, forces a far knockdown and gets you close in.

At close range only, this is a viable followup.

Easiest way to combo, though it doesn't do much damage.

Free damage followup from the sweep.

Safer than n.2B but less damage, also gives you a viable dash mixup, though it's punishable on block if they're looking for it.

Near corner only. Decent damage.

The opponent can be juggled while he's still rising, so you can combo from there into any AB or more 421B.

Above anything else, Mina is not subtle footsies character. Her painfully slow walk speed and having the lowest throw range really limits her options in how she moves, while nearly all of her grounded attacks can be reacted to easily. On the other hand, her dash is very quick and her jump arc is difficult to deal with since she has a lot of air control.

Although it's not obvious, all of j.A, j.B, and j.AB have a short, seven frame landing recovery. She can block during this, but can't do anything else and is vulnerable to throws. Be careful using these when pressed in the corner; not only can most characters dash in for a free throw, but some can also land a well-timed heavy slash during your helpless descent from a blocked or whiffed aerial shot.

Good players can hop over Mina's 2B with 6D and block Mina's 5AB and 623A on reaction, and will walk instead of jump or run, making it very difficult for you keep them out. She just isn't that sort of character, you need to be willing to take risks with her mixups and very fast dash speed.

Because Mina's arrows cause her to stay in the air slightly, you actually have a strong high/low/throw mixup on jumpins because people don't want to risk challenging it. If you can get a safe jumpin you run either j.B, j.AB, land throw, land n.2B, or j.C for the deep hit stun/anti throw mash, and they won't know which way to block or answer. This can be risky, so don't do it carelessly.

Similarly, you can jump over the opponent to create ambiguous left/right situations by doing crossover j.AB at the right positions. This is pretty much a straight up 50/50, so be careful about whiffing it. Getting into the position for it can also be a problem, since if you do it from too high it might take too long for you to recover. It's easiest to set this up as an okizeme trick.

421B n.2B 2BC is almost impossible to block and forces a knockdown. If you can get the opponent to stand still for it, go for it! You can also run 421B 2C which sets up a reset into tick throw or another mixup.

623A will beat a lot of dashes with a backhit if they don't just stop dead, so if the opponent is dashing up carelessly go for it.

Don't forget about j.2C! It's great for changing the angle of back and neutral jumps to screw with the opponent's timing, and preventing otherwise hard landings.

Her rage balance is likely her biggest problem. Being caught by a time slow is almost guaranteed death for Mina against anyone with solid mixups, and having her entire movement set shut down by the possibility of quick death is also a huge issue. You need to be able to take the game to them first. Unfortunately, because of her low life she rages very quickly, and her difficulty in keeping people out doesn't give her much time to meditate. You may find it easier to not bother and try to win matches outright with rage explosion's bonus damage instead.

While she has no good ways to disarm the opponent, don't forget that she still has deflect available. Players are often eager to try and hit her whenever possible because of her low life, so baiting out slashes and aiming for block recoil shenanigans can be a good idea.

Mina has no really fast punishers, so she doesn't take advantage of small openings easily without resorting to throws, so get used to doing dash up throw a lot.

Her pursuits, 2BC and 8BC do ridiculous amounts of damage, and you should always try to follow up with them when available, if you don't need the time to meditate or charge with 421A.