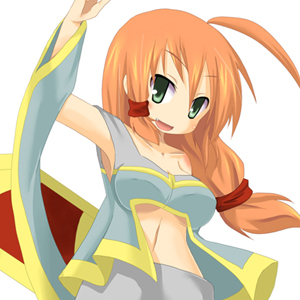 Best air mobility in the game and specializes in mixups. Alicephia doesn't gain meter from attacking, and only gains very little meter from movement, so her ability to steal meter is very important (and also denies the opponent meter). Low damage overall, but once she steals some meter or if she lands an air combo she can suddenly do a lot of damage.

Alicephia is a more advanced character. She takes a lot of work, and has more difficult meter management than other characters. A very unique character but not a good one for beginners.

Alicephia has the best air movement options in the game, she can use her 4 airdashes to feign approaches constantly. She also has full air movement options off her backdash, which means you can double jump airdash backwards etc... making her very difficult to pin down midscreen. Her air movement also makes upwards recoveries especially effective, as she can get out of dodge fairly easily.

Normally the move you want to use in the air at neutral is j.HS simply because it has such a great hitbox compared to her other options, it covers a rather large area and will beat the better anti airs in the game when spaced and timed well. j.P is also an important move at neutral if you ever find yourself in a situation where the opponent is higher up than Alicephia.

214S and 214HS are useful zoning tools that can limit an opponents movement, keep in mind that 214S can be destroyed by enemy melee attacks (even though that attack cannot hit you).

Use Alicephia's cl.5S against airborne opponents, or people recovering above you. It's her primary air unblockable, but the distance you can use it in is limited, get what milage you can out of it.

Level 0 Options
On the ground, Alicephia's staple string is 2P / 2K / 5K > 5HS 2HS. 2HS puts Alicephia at +4 and allows her to go for more ground moves, however she can't repeat the string very long because of pushback on block (you can get a LOT more milage out of it if you delay 5HS > 2HS, 5HS is also only -6 on block which opens up a new mind game that slowly brings them in closer if they are respectful). You can also do 5HS > j9.HS > j.214K / j.236K. j.236K recovers very quickly and lets you followup with a falling j.HS, falling j.HS should put you in a good enough of a position to dash back in, or throw a projectile.

Level 1 Options
After awhile people get tired of being hit, you can ground or air dash after a blocked 2HS or j.236K.

Actual Mixups
After a ground dash, Alicephia can do a boatload of overheads, enough that anyone vaguely familiar with the matchup will be blocking high by default and looking for lows / air unblockables. If you do not attack you will fall rather quickly allowing you to go for low attacks faster than expected. Even though her j.HS can instant overhead

Option Select j.236K Followup Alicephia j.236K followup is performed by pressing 4, holding 4 performs it just fine. So if you put yourself into a position where you are not sure whether or not it will crossup and hold [6], the followup will only come out on crossup, and allow you to continue pressure with a falling j.HS or what have you. An easy set up for this is (some blocked air attack midscreen) > j9.K HS > j.236K.

Infinite Double Jump Glitch For some reason, you can do [j.236K > j.HS dj9.HS] xN without running out of double jumps or landing. Not actually infinite on it's own, but you can move in with an air dash in here somewhere, and as long as your opponent doesn't find a way out of pressure you could technically stay in the air for forever.

j.214K Crossups If you jump over the opponent you can crossup with j.214K very ambiguously. You jump over and immediately perform j.214K (without compensating for the crossover). One possible "setup" is 5K 5HS j9.Delay 214K.

Meterless, Anywhere xx > 5HS (2HS) 5O
•To connect from further out, omit the 2HS and delay the 5O to let them get as close as possible.

Meterless, Anywhere xx > 214P
•Only practical uses are as a kill combo, or as a followup to a 2HS (low).

Damage Ender 2 j9.K S HS > dj9.S HS > j.236S
•For when you're too low with respect to the opponent for the dive extender, or for when proration is too high.

Oki Ender 1 j9.HS O
•Sacrifices ~10% damage (depending on char), but grants you real oki and 25% meter steal. If not for the oki and meter gain, you should at least consider running this for the meter denial.

There are some near corner bash -> dash in and tk bash loop combos that would be useful to know, takes some experience to get a feel for when they can apply. Bash loop can get you a significant amount (though not really huge) amount of extra damage, especially if you're going for okizeme style combos. Extenders don't really add as much damage, but they will give you extra corner carry which is also helpful.

Extenders
Bash knocks the opponent down at an angle, and after awhile they can tech. You can also bounce people off the edge of the screen sometimes (not just the wall!). Unlike bash loop, here you generally will do a bash shortly after a short aerial (like in the combo movie combo in the BnB section), then dash in to followup with an air combo.

Golden Rule
When in doubt, just go for a normal BnB. Stability > flash.

Some air hit > Double Jump > Damage Ender •There's really too much variance here to go into detail. You can get extra damage if positioning is right for a Bash loop / extender.

DON'T OTG WITH ALICEPHIA The primary reason you do OTGs is to build meter, Alicephia does not build meter from this. She also doesn't really have good OTG setups and the Okizeme is more valuable to her. Here's some OTGs anyway.

5K 5O
•Punishable meter steal, good against people who don't know that they can recover and punish.

5O / j.O Knockdown
Just dash and go into your dash mixups. Weak to backdashes midscreen, they are easily punished by doing a late j.S after the dash, which should let you confirm into an air combo.

214P Knockdown
Similar to the 5O / j.O KD, however here you're at the perfect distance to toss a 214S. So toss a 214S then dash and go for shenanigans.

j.236S Ender It doesn't knock down most the time you use it, so it's not technically okizeme, but it's a post-combo situation you will be seeing a lot so you should know your options.

j.236S has strong untechable time on wallslam, and pushes your opponents far away if it doesn't. On wallslam midscreen the most basic option is to do an extended dash to get in close, do a j.HS on their recovery or something. In the corner, you can actually punish bad recoveries with cl.5S, it will hit people who try to air block and if you do it fast enough will also hit people who quick recover. If j.236S doesn't wallslam, you're pretty much out of luck, you go right back to neutral.

Copied from the JP Wiki.