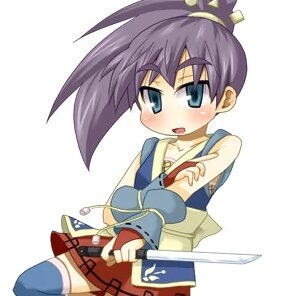 Kiki's original ability is her Rapid Dash, triggered by pushing O, which makes Kiki run quickly towards her opponent. While in this state, you have access to specific follow-ups, that can be cancelled into one another for a maximum of 3 moves. You cannot block while Rapid Dashing.
By inputting 4O, Kiki will run in the opposite direction. If you input 22O, Kiki will run forward very fast, but it will cost you 50% meter.

If you input 22O during an air follow-up, you will spend 50% meter to teleport behind the opponent.

During Kiki's 214K, if you input O while on the wall, Kiki will quickly jump to the opposite wall. If you input 22O instead, she will teleport.

Kiki is a unique, rushdown-type character, with mix-up that focuses on cross-ups and unconventional movement. Her only way to dash is her rapid dash, during which she cannot block, as her regular dash is actually a hop forward that covers a good distance.
Her 236K and 214K follow-ups are also valid tools for movement.

Kiki's normals are abysmal. While her ground normals are already below average, both in speed and reach, her air normals are just plain terrible. This can be troublesome, as she is airborne quite often: her hop dash, 214K follow-up, counter and jump cancels all place them in the air.
As a result, she may get anti-aired by the most unexpected attacks, even unintentionally.

Unfortunately, she's not especially threatening on the ground either: her ground normals are unimpressive, she can't move forward without giving up on blocking and she lacks decent anti-air moves, making her quite vulnerable to air approaches.

Kiki requires good understanding of your opponent's capabilities, especially concerning their movement and their normals. Since you can't block during Rapid Dash, characters with big pokes can make it really hard to get in and you will have to depend more on 236K and 214K Rapid Dash follow-ups.

Once you manage to land a hit, Kiki relies on cross-ups to break the opponent's guard and builds meter rather quickly, which comes in handy as her super deals good damage.

As previously mentioned, you need to have a good idea of what the opponent can do. Kiki struggles against characters with big pokes, as using Rapid Dash becomes much riskier. Since her air approaches are also really poor, you need to be careful of characters with good anti-air moves.

When you're struggling to get in, often the best choice is to be patient and look for a moment where you can use her 236K follow-up to close the distance. When used correctly, you may be able to switch sides with the opponent and appear behind them, making them whiff a move.

Consider using her 214K follow-up, combined with O to jump to the opposite wall, and holding a direction to influence her angle as she gets off the wall.

Your best ground poke is 5HS, which has good horizontal and vertical reach, sometimes even acting as an anti-air. Your best tool for air-to-air situations is j.S, but it is nonetheless a mediocre normal, so you're better off not trying to challenge the opponent's moves and instead use it when you get a good read.

Kiki has good pressure, especially thanks to her cross-up potential, which she can mix with highs and her command grab.

Her 236K Rapid Dash follow-up can be used during a blockstring, but it especially shines after a knockdown. By using Rapid Dash after knocking the opponent down, you can threaten them with 236K for cross-ups, use follow-ups from the front instead, or jump-cancel the Rapid Dash and attack with air normals.

Kiki can cancel j.K into j.P, allowing for a double overhead. When your opponent blocks your jump-in attempt, you can continue your blockstring with ground normals and subsequently cross them up with a Rapid Dash into 236K, or you can use your command grab right as you land.

Be careful of opponents who like mashing buttons, as they can interrupt your command grab, as well as your cross-ups.

Basic combo that works anywhere on the screen, but does little damage. Will cause considerable hard knockdown time. You can hit the opponent off the ground afterwards with 2P 2HS 5O to add a tiny little bit more damage and go into Rapid Dash, but the opponent will be able to tech.

Air combo with j.S starter; you can end the combo with a j.214K followup if you wish to try confusing your opponent.

Ends with a super so it requires a full bar of meter. Works anywhere on the screen.