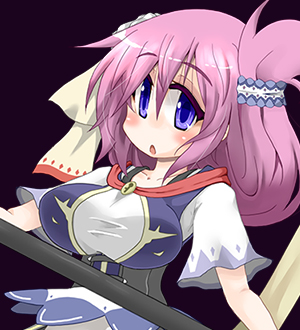 Rosalice is the 3rd Highest Ranking Knight in the Order of Lekseim, an order known for being very religious not just as an Order of Knights but as a whole city. As a Knight of her caliber, she went through a ritual known as the "Blessing of Sunlight". After going through it, Rosalice discovered she was capable of converting physical pain inflicted on her to pleasure, effectively making her a literal combat masochist. With this, Rosalice can not only instill her magic into others and destroy them from the inside, but even restore an ally's power, boost their abilities, and even strengening their healing (thus, it could be possible for Rosalice to do the same to herself). She seems to have eyes for Rescana Almadia; the Headmaster of the Order of Lekseim.

In-game, Rosalice is a hard-hitting character with great neutral and pressure. She has great normals that deal alot of damage, are easy to combo off of and sweep a large area, but all of this comes at the cost of slow mobility and slow startups on most of her buttons. Her main objective is getting you in the corner for nasty high damage combos and long series of mixups.