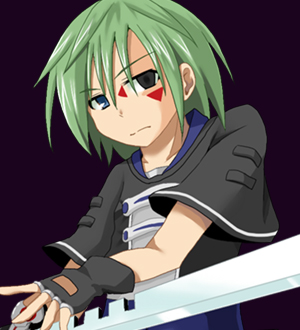 A young man that's half spirit and half human. He's active in Ainefille as a bounty hunter. He's usually silent and doesn't speak much, but is curious in other people's interests. Due to his life in the spirit forest, some of his senses (?) are off. He's not good with females. Because of his mixed blood, his left eye is a spirit eye, which he can use to see the flow of magic and where spirits are. His weapon is the Spirit Sword 「Riglord」. It's a spirit sword that can increase its power with the user's willpower, and can increase it's attack power indefinitely. The attack power of the blade depends on the mental state of the user.

Shake, as of patch 0.938, is a character with a very reactionary neutral, with long, footsies oriented pokes, a fireball, and a parry that counters all mids and highs. The frame data on his normals allow him to play both a close ranged offensive playstyle and a long range, poke heavy playstyle, either of which are effective at keeping the opponent from playing recklessly. His anti-air game is strong, with vertical hitboxes like 5H and 2H allowing him to dissuade jumps and 623H being a fast, huge air unblockable move. Along with that, he has a terrifying whiff punish game. However, Shake is burdened by being less anime than the rest of the cast, being unable to jump cancel any of his normals (even aerial ones), a relatively slow walk speed, and no meterless reversals.

Shake's special meter under his health bar dictates the number of charges his sword has. After successfully landing 236S, you gain a charge. At 3 charges, his 236S becomes a fast unblockable with high damage.

Pros:
-Long ranged attacks
-Strong anti-air game with huge vertical hitboxes
-High damage with meter
-Big damage on counter hits, especially with starters like 2H
-SJ9 has high speed and a unique trajectory
-Lots of safe on block moves
-236S is a whiff punish god and becomes unblockable after 3 successful hits
-Simple to pick up and play, especially for those who don't like long combos

Shake is a versatile character, who can play both offensively and defensively. When played offensively, his safe pokes and above average corner carry allows him to keep an opponent locked down in a corner, while his closer ranged normals are plus on block and good for frame traps. When he scores a knockdown, 236P can be used as a meaty, and he can react accordingly. 5O is used to react to mashes, 623H or air throw can be used to react to jump outs or attempts to chicken block, and an unblockable 236S can keep your opponent on their toes. His 6H can be used as an overhead, but it's stubby range and the inability to confirm anything off of it has it more as a reset tool, since it's plus on block. If one of your unsafe moves like 623H get blocked, 22P can be used to cancel it and make it safe.

When played defensively, Shake takes a more poke heavy and footsies oriented playstyle. Using his strong pokes like 5S and 236S, he can keep the opponent at bay and whiff punish easily in neutral. Call out tools like 214K and 623H dissuade jumping or taking risks to advance their neutral, such as a fullscreen fireball or an IAD jump in. If all else fails, he has 5O that can counter certain moves that characters may need to use in order to advance in neutral (for example, Claudette's 214S).

Either way you play, Shake's best tools lie in his above average pokes. Using his strong long ranged moves will help you win neutral. Since he doesn't BRK things often, he usually has more meter than most other characters. This can be used in a few ways, such as BRKing 236P to make it a bit safer to throw out, or tacking on a 2146H at the end of a stray hit confirm for big damage. 22P is a notable use of meter; it gives you a moment to look at what your opponent's doing and reacting accordingly. For example, if you see your opponent advance with an IAD normal and you don't think you can react, you can press 22P and press 5O or 623H as soon as you get out from the time stop.