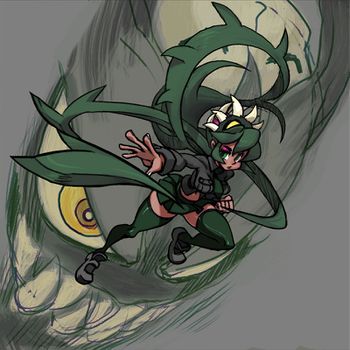 One of Brain Drain's less-socially-acceptable hobbies is cloning, and often he forces the souls of dead warriors to inhabit these clones. Fukua is the result of a fortunate - or unfortunate - Lab Zero accident: a union of two souls. One, a once-proud warrior known for her brute strength in close combat; the other a silent assassin who specialized in ranged weapons for her kills.

Together as one, Fukua possesses the best of both specialties... but relationships formed under intense circumstances often don't last.

Fukua plays a space control game with air normals and fireballs, and once she gets a hit her clones enable very unique and powerful setplay.

Fukua's shadows (214K) can be held to delay the attack by holding the button. Doing this will drain life and go into a reserve, and health in this reserve can be healed in three ways: taunting, landing Invevitable Snuggle, or landing Twice Shy. Taunting recovers 20%, Inevitable Snuggle recovers 33%, and Twice Shy recovers 55%. The health recovery is also scaled by the current damage scaling in the combo. Healing in this way will reset the reserve of health back to zero, and can potentially heal her above her red life, but never more than 55% of self inflicted damage. Healing red health by the normal methods removes 2 points of reserve health for every 1 point of other healing.

Fukua has 4 different intro poses that can be selected by holding a button or combination of buttons during the loading screen before a match.

Fukua has 2 win poses, and the winning player can select a win pose by holding a button at the end of the match.