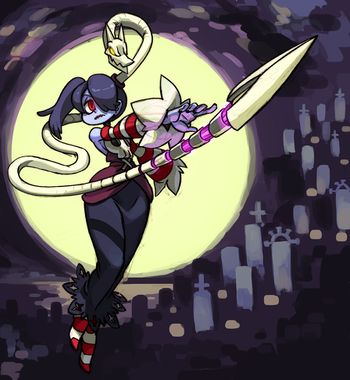 Squigly is the last "surviving" member of the Contiello family, a long lineage of opera singers and among the Medicis' most valuable clients. Fourteen years ago, Squigly's mother Selene obtained the Skull Heart under strange circumstances, and as a result, Lorenzo Medici ordered an attack on the Contiello family. Fraught with despair, Selene became the Skullgirl and revived her family as an undead army. What spared Squigly from becoming a mindless minion was the intervention of the Parasite Leviathan, the Contiello family's friend and guardian.

The battle between the Skullgirl and Lorenzo threatened to spread across New Meridian if not for Squigly and the intervention of the ASG, resulting Selene's defeat. The power that animated Squigly faded, and hers were the only intact remains of the Contiellos found. Lorenzo generously paid for their funeral and has not had conflicts with the Medicis' other clients since.

Squigly is a midrange character who capitalizes off her opponents mistakes. She has great pokes and possesses an arsenal of unique tools and tricks. Squigly can charge herself up and store two different kinds of charges, which can be used to give her specials powerful properties. On the downside, Squigly without a charge is very frail.

Squigly's ground specials all derive from her stances. Executing a grounded special and holding down the button will cause Squigly to enter her charge stance. Specials executed through any punch button put you in punch charge stance and kick specials in kick charge stance. Being in this state causes Squigly to charge up, a visual indicator tells you when the charge is ready. Releasing the button executes the special move, while pressing any other button will cancel the charge stance and store Squigly's current charge level.

...aka Center Stage is the most unique special move in the game and the foundation of Squigly's gameplan. As the name suggests, it centers the screen on Squigly and reduces its size for few seconds. If your opponent isn't already close to Squigly, they will be pulled in and appear on the edge of the screen. The move will create temporary corners on both sides of the reduced screen which cause wallbounce. Most importantly, charged Sing causes superflash which forces hitstop on the opponent, effectively stopping time for a brief moment. Squigly is also able to cancel charged Sing into any of her supers. This allows you to punish any button the opponent presses from anywhere on the screen, making it Squigly's most threatening tool.

Squigly has 3 different intro poses that can be selected by holding a light, medium or heavy button during the loading screen before a match.