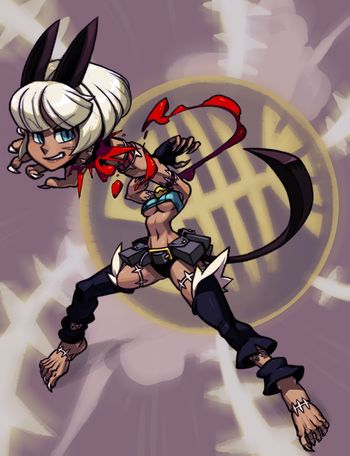 A feline feral, Nadia Fortune is the last surviving member of the Fishbone Gang, a notorious band of otherwise Dagonian thieves. Their last mission ended in tragedy: a failed attempt to steal the mysterious Life Gem from Lorenzo Medici resulted in their grisly deaths. Before meeting her own doom, Ms. Fortune swallowed the Life Gem and managed to digest it. The Gem’s power permeated her entire body, making it truly undying... even after being cut into several pieces.

Now hiding in the shadows of Little Innsmouth, Ms. Fortune plots to avenge her fallen comrades.

Ms. Fortune is a rushdown puppet character who can take off her head, which provides more control in neutral, amazing corner pressure, and unique combos. 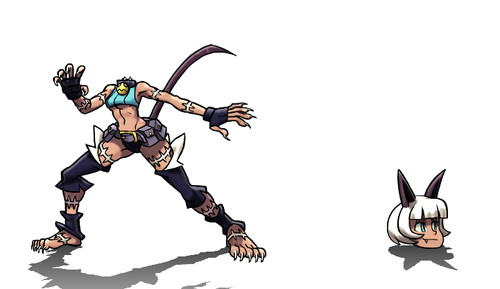 Ms. Fortune can remove her head by using Cat Strike (214P), using Cat Spike (j214P), by getting hit by a snapback or through optional enders on her level 1 supers. While Ms. Fortune is headless...

Some other traits are changed as well:

Lastly, it's worth noting that Ms. Fortune retains the same hurtboxes she has during head-on, meaning she still has a hurtbox where her head would be.

Fortune has 3 different intro poses that can be selected by holding a light, medium or heavy button during the loading screen before a match.