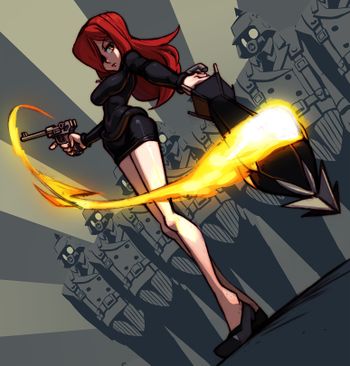 Few know the terrors of the Skullgirl as intimately as Parasoul does: seven years ago her own mother became the Skullgirl that nearly destroyed the world. This tragic past has made her fiercely protective of both her country and her family, and these two priorities frequently come into conflict.

Parasoul is now the crown princess of the Canopy Kingdom and leader of its elite military squad, the Black Egrets. Wielding the living umbrella, Krieg, she fights with grace, poise and cunning to defend her family honor and destroy the Skull Heart so no one can repeat her mother’s terrible mistake.

Parasoul is a charge character with excellent space control tools in her air normals and tears. Up close she has a deadly 50/50 with 6LP. 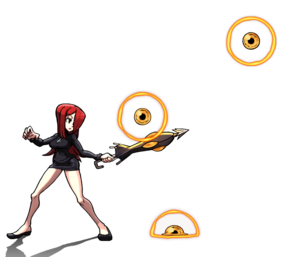 Parasoul can create projectile mines on the screen called tears using her Napalm Toss (214K) and Napalm Shot ([4]6P) special moves. They will detonate on their own after waiting a certain amount of time.

Manual detonation is possible through...

Parasoul has 3 different intro poses that can be selected by holding a light, medium or heavy button during the loading screen before a match.