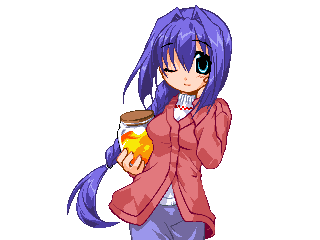 Minase Akiko (水瀬 秋子) excels when she is in the air – she has access to two air dashes, a forward ground dash that places her airborne and some of the best air normals in the game. Her jB is especially potent in combination with her hoverdash, as it is fast, stays active for a very long time, and hits up to 5 times. She can freely control the number of hits it does by choosing when to cancel it into her jC, if at all, which allows her to land cancel it into lows. As if the variable number of high hits wasn’t hard enough to block, she can also cover up the opponent in smoke, which drains them of their RF meter, and makes it physically impossible to see what her mixup is. Add in the ability to corner cross up, time slow, and scary damage output, and you get a character who can take a match off a single touch in neutral. Her main weakness lies in her ground game, which is sorely lacking, and the precision and practice it takes to correctly convert off her hits.

Akiko is a supporting character of Kanon, a visual novel produced by Key in 1999. She is the housewife of the Minase home, and is both Nayuki's mother and Yuiichi's aunt. She has a very understanding and compassionate nature, and is always been there for Nayuki while she was growing up. During Kanon, Akiko is quick to accept the various supernatural events that may take place concerning Yuiichi, and supports him as family during the difficult times.

Stage: In Front of the Minase House (Night) (水瀬家前(夜))

The normal move data table can be found under Akiko Minase/Move Data.

The special move data table can be found under Akiko Minase/Move Data.

Movement is key to Akiko's gameplan. She will be spending the majority of her time airborne, weaving in and out of range in neutral, trying to catch her opponent off guard or doing something risky. She has access to an extendable rising dash which causes her to disappear and become completely invulnerable, making it difficult for the opponent to properly anti air any rising dash approaches. While airborne, she has access to two air dashes and one air jump. It's important to note that after Akiko has used an air dash she becomes incapable of using her air jump. Mixing these movement options with her superior air normals makes her a menace to deal with.

Akiko's grounded arsenal is rather lacking. Her most useful neutral grounded normal is f5B which has an impressive hitbox that can be useful for anti airs, but it has the downside of being air blockable. You'll mostly be focusing on using 236A/B and 214B when grounded, making use of f5B sparingly to try and catch aerial opponents.

214B isn't just an okizeme tool, you can also sneak it out in neutral to keep your opponent on their toes. 214B moves forward slowly and can be useful to slowly chip away at the BIC of an overly patient foe. 214C is also incredible for this due to it's speed and RF meter drain.

jB is just incredible. 8 total active frames for the broom twirl, and after a gap, 2F for the final hit. In neutral, this move can be used as surprisingly hard to deal with wall when doing j8 jB, making sure to time the jB closer to the ground so you're able to cancel the recovery upon landing. Doing this only becomes potent when you're making full use of her aerial mobility to keep your opponent guessing.

jC is huge, both for the hitbox and the way it extends Akiko's hurtbox. It also easily leads into juggles if you catch an opponent airborne. j7 dj9 djC can be an incredible hassle tool if spaced properly and with caution. For hassling, you're aiming to hit nearer the tip in order to make anti airs and RG punishes harder. Certain characters like Kaori, Mishio and Ayu have absolutely no problem anti airing this, so be careful how you use it in those matchups. Overall, use jC approaches with caution.

Pretty much. Akiko's tool set is by far the most predictable in the game. She has to make up with it by abusing her movement options, surprising her opponent, properly baiting anti airs and reversals, and above all making every stray hit count. Once Akiko gets that stray hit, she can more often than not convert into large damage and unseeable, looping okizeme.

Mostly you'll be playing hassle and runaway, taking time to build meter and fishing for stray hits in neutral. You will be wanting to sprinkle in some surprise approaches to keep your opponent on their toes, however. Being as predictable as Akiko is, taking initiative and attempting to approach your opponent can be tough, but she definitely has the tools to make it work.

The key groundwork to this is keeping your opponent guessing when you'll use your movement options. [j66 j44], [j7 j9 .. j44], [66 j7], [66 j44] are all examples of neutral movement that can be used to keep your opponent guessing when you'll actually approach. There are plenty more variations on this, and I encourage Akiko players to become familiar with all of her movement options, what positions they place her in, and what approach options she has access to from them. Watching match videos of high level Akiko players is invaluable for learning her options.

Keep track of your 236A/B cycles and make use of 236A/B FIC to create approach opportunities. This is by far Akiko's most reliable way to approach.

Neutral time slow activation can also be powerful. The higher the level the better, but it does have diminishing returns. Level 2 is ideal, level 1 can be too short, and level 3 is slightly too long. Level 1 is still useful however, and level 3 is really only useful when the match is almost over and your opponent has very little health left. Upon neutral level 3 time slow activation, the opponent will usually just double jump due to Akiko's lack of juggle combos during time slow, especially on an opponent high in the air.

Patience is your best friend. The more time Akiko is left in neutral, the scarier she becomes, allowing her to whiff normals to build super meter and passively build RF meter. The more desperate your opponent is to stop this from happening, the more risks they will take. The more risks your opponent takes, the more opportunities you have to punish them for taking them! Akiko strives off this, getting ridiculous damage from strange starters in neutral leading into her looping okizeme.

Akiko's main strengths lies in how easily she's able to convert from stray hits into huge damage, meter gain and oki. Her combos are very long, made even longer by the double vacuum ender after knife loops in the corner. Building a large chunk of super and RF meter back is why she snowballs so easily, especially when she's already got 2+ super stocks built, giving her access to looping time slow okizeme. Once she has ample meter built, Akiko can take more risks, as all she really needs is one knockdown for an opportunity to end the round, even if she has no BIC.

Akiko is capable of converting most hitconfirms into disgustingly large damage and okizeme, all the while building insane amounts of meter as she does it. Akiko players should be aiming to make the most out of any and all stray air hits they connect with and convert into corner carries and looping okizeme. 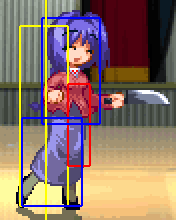 Akiko has two different hitboxes on her 5C. The inital hitbox (shown above) is much smaller but does 200 more damage than the later, larger hitbox. Ideally you want to hit with this hitbox as much as you can, but it's not always possible due to spacing. For newer players, just being aware of this hitbox is enough - focus on completing knife loops even if you use the larger hitbox instead.

Akiko has some nasty okizeme due to a few factors. Firstly, jB is 5 hits and the amount of hits can be adjusted freely by whiff cancelling into jC. Well timed jump-ins or IADs can also cause this effect without having to use jC cancels, using a "land cancel" instead. Secondly, Akiko's fire extinguisher special (214A/B/C) obscures the screen where it is placed, making it even harder to block. Thirdly, Akiko's time-slow super, which slows down the opponent and leaves Akiko at normal speeds. Finally, Akiko's vacuum special move will always leave a gap in the corner, allowing five possible ways Akiko can break your guard.

Below are some simple time-slow setups to be used after 41236Ax2 in the corner:

Notes: Some of these do not work so well on fast rising characters like Cello. These actions are to be performed as soon as you regain control of your character after the final 41236A.

After 623A clean hit in the corner, an immediate 641236A upon landing into an instant air dash jB is a safejump setup. If they reversal and don't IC, you get a chance to punish. If they do nothing, they have to block the jB mixup. If you get a hit, you can confirm back into 623A rekka clean hit and repeat the setup. 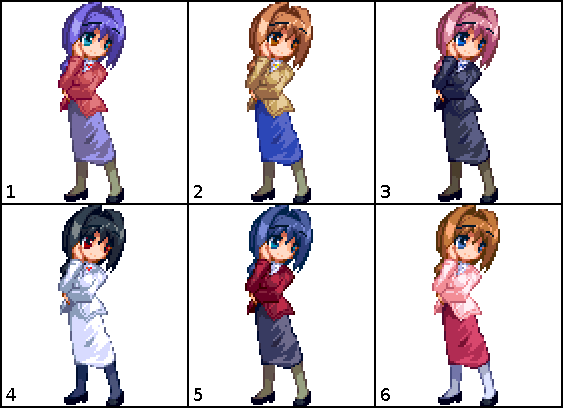