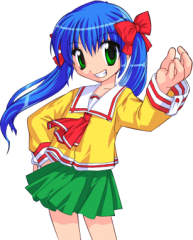 Nanase Rumi (七瀬 留美) is a character inspired by the Samurai Spirits and Last Blade series, with big, slow normals doing huge damage and a shinai that she can lose, leaving her to fight bare handed until she picks it back up. Many of her specials and normals have armor, allowing her to just bully her way through the opponent’s pokes. Her defining special move is her command throw, inspired by Juzoh of the Last Blade 2. It is composed of two parts: the grab itself, and the swing follow up. Depending on the accuracy of the follow up’s timing, the swing may go from completely missing to hitting a homerun for a good 40% of the opponent’s hp. Her dragon punch is also noteworthy, as it is huge, hits on both sides and does good damage, but if it is not IC’d she throws her shinai away in a follow up leaving her bare handed. While barehanded she loses armor, damage, range and most of her specials, but is a lot faster and gains access to a new super. As a grappler, her gameplay style when on the offense is very much rock paper scissors, with some very good damage when she guesses right.

Rumi is one of the heroines of ONE, a visual novel produced by Tactics in 1998. She is a student who recently transfered into Kouhei's school. She met Kouhei on her first day, when they crashed into each other at a turn in the sidewalk. She dreams of becoming a proper "maiden" and tries to act cute and kind, but her acts always fall apart due to Kouhei's tricks. During ONE, Rumi hires Kouhei to act as a bodyguard.

Rumi's main plan in neutral is to patiently wait for her IC meter to charge up while deterring her opponent from approaching.

Once she has IC meter ready she can make efficient use of her 623* Series allowing her to go on the offensive.

She can choose to approach the opponent on the ground by dashing close up to them and use 5A/2A/66A/662A to start pressure.

If the opponent seems to use attacks to stop her from getting closer, she can attempt to punish those with using the armored frames on (f)5B, 66B, 2C, 5C or 623*.

If the opponent tries to jump out of her approach, she can try to counter that with the use of 2B, 662B and 662C.

Rumi in general should not attempt to approach the opponent from the air unless heavy reads are involved.

Jumping in neutral should only be considered when projectiles can be avoided with it or to deter opponents from jumping/airdashing into her by making use of the long active frames of j5A.

Rumi's pressure follows a basic Rock-Papers-Scissors principle, the basic outline would be following:

She can get the most damage out of grabbing her opponent, however no half-decent player would ever allow this to happen constantly and will start poking and jumping while in pressure. To discourage this, Rumi can punish those attempts with her 623B. But 623B will require IC meter to start a high damaging combo as well as let Rumi keep her shinai and avoid a potential punish. Therefore her pressure can be broken down into two phases:

During this phase the player should mainly focus on staggering moves like 5A, 2A, (c) 5B and (f)5B until IC meter gets charged up sufficiently or the opponent gets hitconfirmed into a combo. As 66A is plus Rumi can use it to close in on the opponent and reset the pressure. It is advised to be wary of enemy reversals and Recoil Guards during this phase. With proper timing of armored moves these two threats can be dealt with. The first hitbox of 5A offers enough frameadvantage to make 41236A a considerable cancel option as the opponent will not be able to poke out of it.

Once the player has built up enough IC meter it is time to decide between attempting a grab or executing 623B IC depending on what action they expect from the opponent. To ensure maximum efficiency during this step, You should be at least within 41236B range of the opponent after the previous phase. Otherwise you will have to dash in prior attempting to grab / 623B, giving the opponent extra time to react. Rumi's pressure is very prone to enemies jumping out due to relying on slow normals and grabs. Her only anti-jump moves are 2B, (f)5B and 662B which are often too slow as well as 662C which carries a lot of risk for very little reward. When an opponent attempts to jumping out of Rumis pressure they will either attempt to attack her while falling down, or double jump / airdash away from her to reset back to neutral. If you expect the first option, it is recommended to prepare for the attack by buffering 623B or RG. If you expect the latter, you can attempt to catch them with j5B for a little damage.

Being consistent in landing Homeruns, conversions of most grounded moves and 623* combos is key to get the most out of Rumi's pressure.

Due to being fully invulnerable, 623B can be always used against frametraps with little risk. Her recoil armor allows her to disrespect untight pressure. Which armoured move should be used depends on range and what armoured frames are available.

Especially against longer ranged pressure Rumi can shine with 5C and 2C as options which can lead into high damage combos with a little meter.

The only way to deal with tight pressure is to Recoil Guard a move and force a Rock-Paper-Scissors situation by following this principle:

Both players using the same option can have various results depending on matchup, distance, meter, etc.

Having access to Recoil Armor may allow Rumi to attack at otherwise undisrespectable spots, this will most likely lead into a Recoil Counter resetting the situation.

Rumi has got 4 main options against opponents trying to attack her from the air:

While she does not have a fast jab with good vertical range, she can still beat airdash resets with her 623B, or when IC meter is not available, 662C.

When in bare-handed mode

Rumi is essentially crippled when in bare-handed mode due to losing access to recoil armor, high damaging combos and cancel options.

The main priority therefore is to recover the shinai at all costs.

With a self cancelable j5A and a strong j5C she gains easier access to jump-ins in neutral which allows her to start pressuring the opponent more frequently.

Her bare-handed pressure revolves around staggering with 5A, 2A and resetting with 662A until she gets an opportunity to grab the opponent with her 41236* which gives her enough time to land a combo and/or recover her shinai.

A potent, but difficult way to land the command grab is to set it up prior with a blocked 66A.

Rumi does not have access to strong and safe jump-in options for okizeme as all her air normals will lose easily to Recoil Guards.

In order to retain her Rock-Papers-Scissors aspect of her Pressure, it is recommended to stay as close as possible to the opponent and attempt a tick throw set-up using 5A 41236A. To prevent opponents from using RG against the 5A to gain Grab invulnerability, Rumi can start with 2A instead and still be close enough to make the cancel into 5A 41236A work. If opponents attempts to jump, canceling into c5B or 2B can catch them.

On a midscreen knockdown that leaves the opponent close to Rumi, 668 j5B 5A is a decent left/right mixup.

A third, but very risky okizeme option is the use of j623* to beat Recoil Guard attempts against aerial attacks or using FIC during it to attempt a high/low mixup with j5A or 2A in bare-handed mode. When done while the opponent is near the corner it may even cross the opponent up and allow a combo which gives you enough time to recover the shinai.

After grabing the opponent with her "Happy Hell Maiden" special move while holding the Shinai, Rumi enters an animation where she can follow-up with these moves:

Hitting the 236B and 236C followups on the correct subframe

EFZ runs at 1/3 frame steps. This directly affects Rumi's homerun swings as their damage varies between every step.

To guarantee a slightly higher damage output from the swings, the player can delay their swings by less than a frame with these actions:

Furthermore there is a variation in the damage dealt depending on which side the player is on.

These are all the possible damage values (assuming the player has full BIC meter): 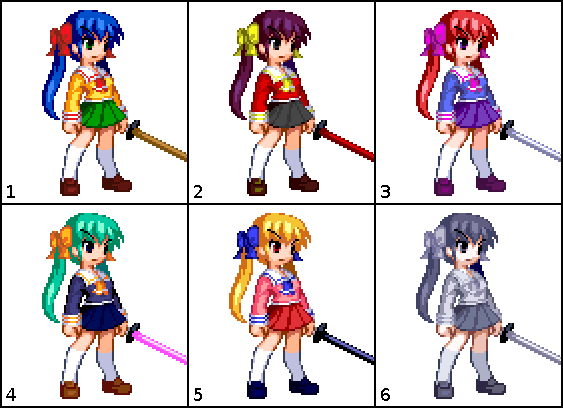