UNKNOWN is a strong zoning and oki based character, who has by far the best movement in the game. In addition to having three different teleports and an arsenal of long range moves, she also gets access to her flight special ability by pressing S, which gives her absolute 8 way control over her movement, at the cost of draining IC meter. Her flight is an incredibly versatile skill: it can be used for movement, to cancel off any normal keeping her safe or maintaining pressure, and gives her full control on oki to create an extremely hard to see five way mixups. Her ability to oki and control the screen is further enhanced by her Great Migration super, which summons a lemmings parade off either side of the screen, keeping her opponent locked down and giving her the opportunity to mix them up.

UNKNOWN is a character from ONE, a visual novel produced by Tactics in 1998. Her resemblence to a younger Mizuka is positively uncanny. During ONE, she gets to meet Kouhei again in the world of eternity...

She is also known as "Mirror Mizuka".

The normal move data table can be found under UNKNOWN/Move Data.

The special move data table can be found under UNKNOWN/Move Data.

UNKNOWN's flight ability is an extremely integral part to her gameplan, and can be used to make moves safe or to create ambiguous mixups. This section will be broken down into three parts: Flight Basics, Flight for Pressure, and Flight for Mixups.

UNKNOWN can start her flight by pressing the S button during the neutral state, or during a normal. She cannot start flight during a dash, during her second jump, after her airdash, or during a special. From this state, RG meter will be constantly depleted until UNKNOWN is knocked to the ground or presses the S button again. She can input any one of the 8 directions to move in that direction. Pressing S again will cancel her flight and UNKNOWN will start falling to the ground. However, if one of the 8 directions is held during this S press, UNKNOWN will gain momentum in that direction. For example, holding 8 and pressing S (j.8S) will result in a small hop from her current position and she will fall straight down afterwards. j.6S will cause her to fall to the ground, but also arc her forwards. Pressing any one of the down buttons before canceling flight will accelerate her descent, and give momentum to whichever side is pressed.

UNKNOWN can use her flight cancel in the middle of blockstrings, or after an unsafe normal, to launch herself into the air and continue to pressure the enemy. For example, 2AABCS is a common string, and will make sure that the 2C cannot be punished on block, though it can still be punished on RG. To combat the opponent's RG, the UNKNOWN player will want to mix up when she cancels into flight, for example, 2AABS instead. From here, UNKNOWN can continue to pressure in several ways. For example, j.[6]SC is a very strong option that is hard to beat out, but is also very easy to block. j.9SC is a strong 3-hit option that is easy to confirm, but is slow and can be poked. j.9AAA is a safer option against RG, but is hard to get the right height for without practice. j.3S 2AA etc. is her low option, and is used when the opponent starts to respect her other options. j4SC(whiff) is the bait option; it is extremely safe and has no potential to do damage, but depending on the opponent, baiting out a DP is more than enough. From here, if no DP is baited, you can continue on into knives or other pressure/zoning tools.

After a knockdown, usually from 2C, UNKNOWN has all the time in the world to use her flight ability for extremely nasty mixups. She can either do late flights, or flight cancels from jump/2C.
For late flights, UNKNOWN will allow 2C to finish completely. Afterwards, you can press 5S to fly, and go for a 5-way mixup. You can press j.3C(whiff) 2A, j.2C(whiff) 2A, j.[6]AAB j.236236A, or just plain j.AAB j.236236A. You can throw from any of the low options as well.
For 2C flight canceled mixups, UNKNOWN can do one of four things: she can j.66 (past opponent) and do one of the following j.2S 2A, j.3S 2A j.8SC. She can also choose to hang back and j.9SC to do a left/right mixup.
Her 2C can be jump canceled, and from there, flight canceled as well. Depending on your height and distance, 2C 8 j.S j.3SC can hit either front or back, and can be comboed into 2AABC again, looping into itself.

This is not an exhaustive list. Her flight ability is extremely free form, and can take on many forms of equally disgusting mixup potential. Experiment, and find what works for you.

In addition to one of the best mixup games in EFZ, UNKNOWN also sports a very good zoning game. A combination of j.236A/B ~ j.236A/B, knives, teleports, and flight allows UNKNOWN to dictate the pace of the match and keep the opponent away, as long as she chooses the right option for the moment. However, with her flight cancels, she can also play a very respectable rushdown/pressure game. This leads to two very different playstyles that a good UNKNOWN must be able to switch between on the fly to make the most use of her toolset. The best and probably only way to become proficient at this is copious amounts of practice. Good luck.

Both of her different playstyles also are complemented by the RF meter, and great care should be taken to pay attention to this meter during gameplay. A rushdown-oriented playstyle will, by means of flight cancels, naturally almost never build BIC. UNKNOWN will be playing for random hits into confirms and gaining damage off mixup loops. You will often use lemmings (23626A/B) during this style to complement your flight usage for mixups. On the other hand, a zoning style of play naturally will use less flight and build BIC several times over the course of a game. A good UNKNOWN will need to know several conversions into her high-damage BIC combos from anywhere on the screen. Lemmings will be less used, but j.236236A/B will be used to end combos for high damage. A good tip for advanced players is to use flight before you build BIC to ensure that you don't get BIC before you are ready to combo. This will maximize the amount of damage proration you gain back from BIC, as well as making it difficult for the opponent to drain your BIC meter.

From Good to Top Tier

UNKNOWN is often put high up on tier lists, but these placements are mostly theoretical. A very basic UNKNOWN player that can do mixups will still have issues with finishing off opponents, as looping 2AABC into a mixup is very low damage, only about 2k. A top-tier level UNKNOWN will need to have very good mixups, flight control, zoning experience, and most importantly, the ability to confirm mixups into 66B. With the ability to 66B after a mixup, UNKNOWN's average damage from a mixup goes from 2k to 3.5-4k. With BIC, UNKNOWN can easily reach 7-8k on a extremely hard to see mixup. Without the ability to 66B confirm, the UNKNOWN will cap out around 6k. An UNKNOWN placed in top-tier should be able to optimize all of her confirms, but if she can't then she probably drops a tier level.

Combo replays can be found here.

Only works on some characters. Table below has extended details. Adds an extra 6-900 damage.
After j.ABC, one of the below. Finish with generic ender, or 5A 41236C for tech trap.

A small selection of advanced combos. Applying these combo parts to different characters, especially due to knife loops, is a task left to the reader. 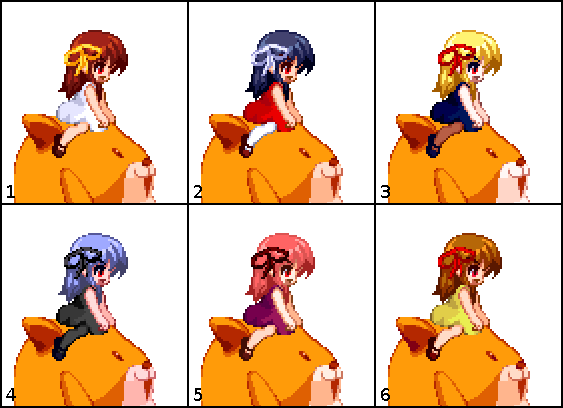