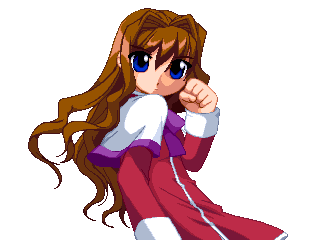 Misaka Kaori (美坂 香里) is the boxer-type fighter of EFZ, taking after Dudley from Street Fighter, even gaining his “ducking” move. As a boxer, Kaori is extremely strong in close quarters, and excels when the opponent is in the corner. She has basic combos that can carry the opponent to the corner, and with meter, has much more advanced combos that can deal massive damage. It is not unheard of to see a Kaori take back a match that she has been losing by 50, 60, even 70 percent life. Her weakness lies in being zoned out by characters with strong projectile games, and she must make masterful use of recoil guard and ducking to get in before she loses the match.

Kaori is one of the supporting characters of Kanon, a visual novel produced by Key in 1999. Kaori is Nayuki's closest friend, and is Yuuichi's and Nayuki's classmate. She is very smart and knows a lot about her classmates and the town, but does not seem to be aware of any of the supernatural happenings that take place. During Kanon, Yuuichi learns that Kaori has the same family name as Shiori, but Kaori strongly denies any relation...

Kaori has very short range, but this is made up for by her high damage, and more importantly, her lightning pokes. to deal with enemies, get used to figuring out her max range on her B moves, and C moves. when approaching the enemy stick mainly to bobbing in and out of the opponent's range with her walk-speed and poking with B. stuff jump-ins with a 2B (learn the range, it's ridiculously easy to punish with) and the opponent's bad spacing with a 5BC > BnB on B-hit-confirm. her attacks have alot of hit-stun so getting damage is all about hitting hard after every B hit.

but don't forget A! if your at close range (deep), use your jab aggressively, hit-confirm into 5C! kaori has one of the few Cs that can be used right after an A and still combo.

66B, if you are at semi-close range, dashing in with 66 makes you nearly mid/high invincible, because you go through the opponent during the dash. Low attacks will still hit though. Using B to start your rush is safer than A because it has increased range and hits twice. Always use an attack after 66, if it whiffs, you can be safe to guard.

Don't jump-in. IAD is stupid with Kaori, you have goddamn magic walk speed. If you do IAD, it better be for oki or high/low.

Poke a lot, you have the largest collection of safe-pokes of any character, throw some punches out even if you don't mean it. In fact, just jumping up and down at full-screen and whiffing j.B/Cs will build up precious meter. Hit-confirm EVERYTHING into 5C BnB rush. This does not mean throw out 5Cs and hope the opponent doesn't out-range you. Throw out your Bs and Cs and be prepared to block/RG on whiff. Land a poke, execute hard.

Recoil-ducking is not a replacement for a dash, your walk-speed is. Use it full-screen with your back to the wall and land a retarded long-range 66C (which isn't safe), or use it when you can predict a DP on wakeup and punish with dash attack.

214A/B/C are awesome. IC A and C versions for combos, use B version with oki for free combos. C version is invincible at startup, but it's basically an A version, so use it the same way. Overhead command is tricky, so be as sneaky about it as you can.

Low-jump IAD shenanigans. Oki IAD is cheating with kaori, since you can either hit with a 1.2k+ throw, an aerial/crouch high-low staggering, fakeout into 214 for overhead tricks, fakeout into low. It's craziness. Corner-block-strings with low-jump IAD is pretty crazy too, since you glide just above low-attacks, and stopping the air-dash will ground you almost-instantly.

623A/B on wakeup, force block? cancel first block on B version and tick throw? Link A version with K punch at the end. etc. C version is your DP, so that's a different thing entirely.

Walk-speed + normals = damn-long block-strings. Just walking forward and trying to hit with A/Bs or 66A/Bs and 2Cs (5C is for hit-confirming into combos), can end up being it's own mindgame in its self. Watch for jumps and stuff with 2B or airthrow. Use your incredible walk speed to tick throw for chaos, or walk in 214 for insanity.

They fear the corner, and you landing any normal. They will panic if you get them in the corner and are forced to block. You just sit there with a wicked grin.

Kaori gains tons of meter, save it for FM. They never see it coming when you are hitting them with constant 2k combos off of pokes.

edge rush BnB: (launcher/2B anti-air) 9 j.B 66 j.AB land (2B) 9 j.B 66 j.AB... off of a launcher or anti air, you can chase the opponent and with a series of airdash cancels you can effectively push the opponent to the corner from anywhere. can even lead into a corner juggle.

Corner Juggle BnB: (launcher/edge rush BnB + corner) c.5B/5A...5ABC 236236A/B/C you can juggle the opponent in a corner for an absurd amount of hits, using 5A, c5B, f5B and 2Bs. with a bit of creativity you can easily juggle into 5k damage range. this is also a very flexible combo, but requires very strict timing and observation.

meterless corner juggle attatch (from 66A 5C string) get near corner, use 2C instead of 5C > 9 j.AA j.A land cornerloop... need to hit with 2 quick j.As and then pause for the third for positioning. super easy, but hit practice mode first.

extended Cyclone corner juggle loop: (launcher/edge rush BnB) [Corner juggle BnB] (use cyclone instead of super) [Cyclone loop] [Corner juggle BnB] IC [Cyclone loop] [Corner juggle] (Blue IC) [Cyclone loop] no I'm not going to write it out. if you can pull this off you don't even need to be here right now. the juggle meter is effectively reset after the super. this combo can EASILY roll into the 7k/8k damage range. this combo is very dynamic, a ton of factors are playing out here: how long to juggle before boosting the juggle meter with cyclones, how many cyclones can you get in before ruining the combo, timing hits perfectly. as you can see, this is the pinnacle of kaori play. you could even use a lower level super at first, stocking one of your levels for later use in the combo.

There's Something about Cyclones

The B version of Kaori's "Cyclone Upper" move (623B) is wonderful to use on opponents who are waking up, since it is one of those rare special moves which can be cancelled into normal moves. Good for mixups. Someone needs to expand on the possibilities, I don't play Kaori.

there's a special juggle, using 2 hits instead of the first hit. i have no friggin clue. it's about as mystical as kaori's 66B(1) juggle loop. 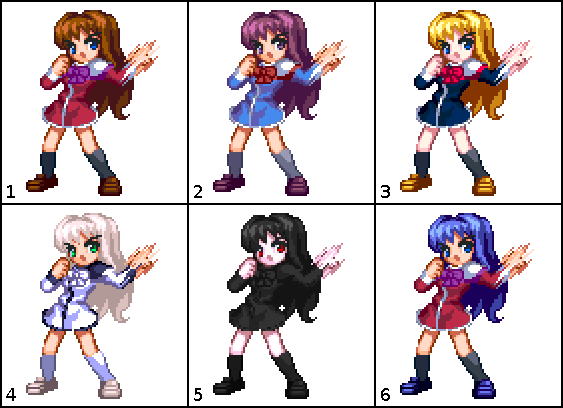