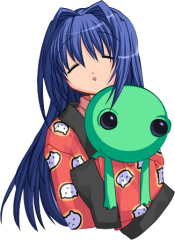 Minase Nayuki (asleep) (水瀬 名雪(寝)) is an oddball character, who uses her sleepy kung fu style of tricky attacks and eccentric movement to fight in an unpredictable manner. Her character specific jam mechanic plays into this, making the options available to her at any given point harder to pin down. During the match, she can consume jam, and level up her jam counter up to a maximum of nine. Conversely, each time she gets knocked down, she loses one jam. As the jam counter increases, her moves gain upgrades, brand new moves are unlocked, and she even gains additional air dashes. If a Neyuki manages to reach level nine, she becomes nigh unstoppable with very strong lockdown and mixups, triple air dashes with hitboxes, multiple escape options and high damage. On the other hand, if she drops all the way down to zero jam she turns into a miserable existence, stripped of many of her crucial moves and left with sluggish attacks, poor movement and pitiful escape options. However even at zero jam you can’t count her out yet, as her Final Memory is one of the best in the game due to its sheer damage output.

Nayuki is one of the heroines of Kanon, a visual novel produced by Key in 1999. She is Yuiichi's cousin, childhood friend, and has always been in love with him. Nayuki is the daughter of Akiko, and is also classmates with her friend Kaori. She is an extremely fast runner and is the captain of the school's track team because of this. On the other hand she is a very heavy sleeper, with a massive collection of alarm clocks that are able to wake up Yuuichi in the adjacent room, but do not seem to work on her at all. Nayuki really enjoys strawberry jam and strawberry sundaes, but is completely terrified at the mere mention of her mother's "special" jam. During Kanon, Yuuichi is warmly supported by Nayuki as he tries to help the people he cares about, but as he starts to remember what happened with Nayuki 7 years ago, things turn for the worse...

The normal move table can be found under Nayuki Minase (asleep)/Move Data.

The special move table can be found under Nayuki Minase (asleep)/Move Data.

Basic corner combo for no IC and no meter. The timing on the airdash part and jAABC will take practice, but is mostly stable. Can do jAAAC instead for slightly easier version. (3340 DAMAGE) [replay 1-1]

Corner switch combo if you have BIC and can get a 2A. Need to be right next to opponent, press the jB after BIC at the height of the opponent's arc. (4754 DAMAGE) [replay 1-5] 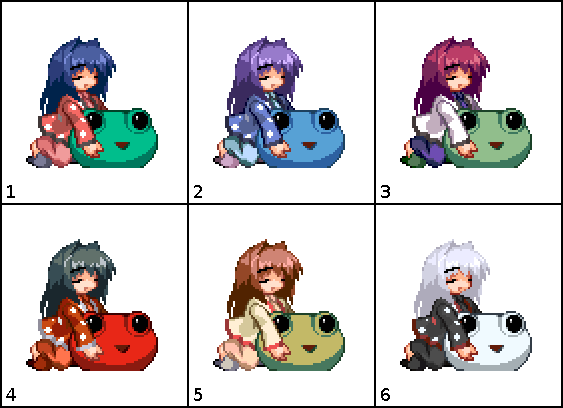