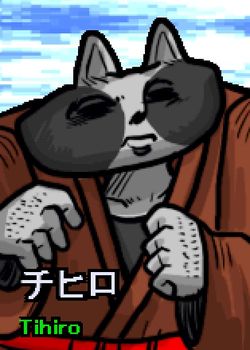 Chihiro has been practicing judo for over 30 years and continues to have a strong grip even in his middle age. He is so sturdy and precise that his children joke that he is “one billionth dan”. He felt that with his youth behind him, he was approaching the limits of his judo ability. Ready to pass his knowledge on to the next generation, he started his own dojo and became a judo instructor. He doesn’t advertise his dojo, only letting it grow with word of mouth. When a television show reported on it, it exploded in popularity and he soon had many students eager to learn from him. He was quickly able to upgrade to a much larger dojo and many business opportunities became available. Though he became a minor celebrity and started earning a lot of money, he hasn’t forsaken his passion of judo. His main priority will always be enriching the lives of as many as possible with judo and his teachings of discipline.

A grappler with surprisingly strong combos. Chihiro is rather weak at neutral, but deals a load of damage when he gets in. His main threats at neutral are 2B or 2EX for lows, j.B for a strong instant overhead, and 5B as a forward-advancing move with enough frame advantage to tick throw off of. Once Chihiro lands a normal throw, he can Kyanta Cancel into very high damage.

Super is the preferred Type for Chihiro, giving him the speed and life he needs to compete with the strongest members of the cast. Demon has 2EX loops available to it, and the Demon activation can be used in place of Kyanta Cancel, so it's an acceptable option for a more aggressive Chihiro.

Works off many starters: 5A , 2B , 5X , Throw, etc. The timing of the j.EX is strict at best and inconsistent at worst.

If Kyanta Cancel is timed correctly (just as Chihiro's throw connects with the ground) this combo deals 20 more damage.

U2 can be added after 2B in any combo that has it as an ender.