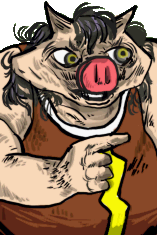 An aspiring musician, Spike has tried to make a living as the sole member of his punk rock music act, “Spike★Headz”. Down on his luck, he fell into a downward spiral, drowning his sorrows in alcohol. Eventually, the only place that came to welcome his music was his favorite pub, Hammer Spot, owned by the Tsuchinoko family. Ruri, Anna's sister and the main proprietor of Hammer Spot, really wants Spike to succeed, even managing to reduce his drinking habits. After some encouragement, Spike decided to get a job at a construction company, but he hasn’t completely given up on his music dreams. Because he performed drunk for so long, he now pretends to be drunk on stage as part of the act.

With his oppressive projectile game, Spike can control the pace of the match better than most other Kyanta 2 characters. His 5X fireball is especially notable for having two hits. However, against skilled opponents, Spike's special moves will grant huge amounts of meter when parried. Spike can not vary the timing of the bottle or fireball, so to prevent the opponent from hanging back and parrying, the pig must charge, using his long-reaching normals and momentum-altering jumping attacks. Spike's only real weakness is his mediocre reversals, but 5EX or either of his Ultras are serviceable.

Spike is among the most well-rounded characters in the game. In the past, EX type allowed you to build meter by moving forward, but now that it has been reworked, Spike gets the most use from the extra health afforded to him from Stamina type. Super Type leaves him with his only reversals being his sub-par EX moves, but he can find use in the additional Speed. Pick Super for an aggressive Spike!