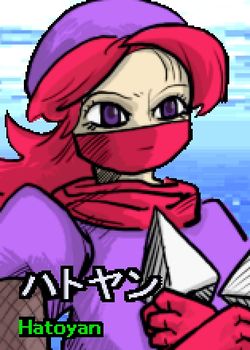 Like all good ninja, Hatoyan Hattori is a master of hiding in plain sight. She is the most proficient user of camouflage ninjutsu in all of Japan. When sent out by the Hattori clan for a mission, she ensures that no one will ever know a ninja was there. Despite being in her mid 20s, she appears much younger, so she can quite easily play the part of an innocent girl.

The master of the Hattori clan received an unmarked letter from a carrier pigeon. It claimed the location of Gyanta, who has killed many ninja of the Hattori clan in the past. It was thought that no one outside the village knew of its location, so who could have sent this letter? Hatoyan is sent to investigate this letter and to be mindful of a trap. She prepares her disguises and heads to Inuneko Jr High School in Ikebukuro, where she will pose as a transfer student.

Hatoyan is a footsies monster, with three different angles of diagonal projectile in her j.X and an above-average walk speed. Her command grab, 2X, allows her to net huge damage in the corner and is way more evasive than it should be. She works well anywhere on a team and only struggles against characters that can circumvent her Shuriken and threaten her from the air.

Recommended Types: Stamina, Super.
Hatoyan's EX moves do not allow follow-ups so there doesn't seem to be a reason to choose Demon Type. Stamina is without drawbacks, and the extra speed from Super can help her follow her Shuriken. Her Ultras are not so strong that EX Type should be regularly chosen, but perhaps you could try to force Boko using EX Type Ultra 2.