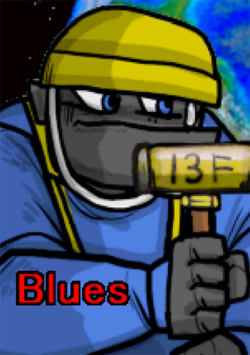 Blues is the owner of Blue Mortar Construction Company which specializes in remodeling and repairing dilapidated buildings.
Ever since his son died in an abandoned building accident, it has been his mission in life to repair old abandoned buildings.
He always takes contracts at cost often earning almost no income. This was too much for his wife. Now divorced and alone, all he has left, is the company.

"I don't care if I cut 12 million to 10 million, it's still to expensive for my customers!"
Some would call him a saint. His workers, after a light payday, call him other things...

He tries to make it up to them when he can and ultimately his good character and the size of generosity inspires and motivates his workers to continue working for him.
"Chief Blues? Well.. He's just trying his best and we are regarded as a excellent construction company. He often gives us free food as well!" 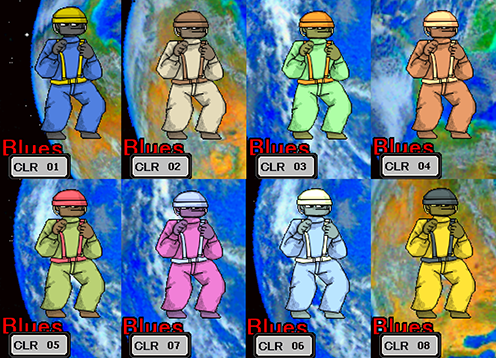 Great for beginners or just overall good type to pick.

Stamina: Great beginner type and overall type for Blues. Gives you a nice health cushion to trade blows with 5B spam. Ultra 1 gives you easy confirms into +180 damage off grab.

Super: You lose your ultra confirms for speed. The extra speed allows you to close in faster on a 2X bomb, giving you a mixup(5X,2B,Grab) from midscreen distance on anyone trying to parry the incoming bomb.

Any character with 120 health is gonna be KO'd by almost any confirm.
Blues outside of Speed and super type can be slow and clunky, but his main weakness is that he needs meter to reversal, and even then, he has trouble Anti airing any attacks coming above him.
Which means more than often than not, you may lose the first exchange as Blues and that could be the round. If you are playing any of the below types and seem to be KO'd too quickly.
Try switching to Stamina/Super until you getter a better grasp of Blues' weaknesses. SAFETY FIRST.

EX: Glass Cannon. Allows you to approach with EX moves more easily and then build meter into a ultra.
Most anti-air counter hit situations can lead to big damage. You can KO any 180 Hp character with Zero bar off a grab.

Demon: THE DEMON BLUES
Glass Machinegun. Game plan revolves around putting the opponent in a situation for Demon EX Loops which Blues has a lot of confirms into. Catching a opponent crouching in the corner is almost a guaranteed KO.

5B, 2B Spam
If you trap someone in the corner, just press 5B.
Mix in some 2B's every once in a while.

2B bomb
Cost: Free
Can be set up from 2/3rd screen as a layer of protection on incoming opponents.
Either trading a low fireball or acting as parry bait to force a reaction out of your opponent.
Speed/Super can do it from half screen. Susceptible to being parried.

2EX OKI
Cost: .5 Bar
Using 2EX is a good option against a opponent on their wakeup.
You will want to 2EX just about as the opponent gets up and is about a quarter screen away.
Gives you time to block any reversals and follow up on any hits. In the corner can lead the U1/DC loops.

Bomba loops
Cost: .5 bar
You can loop 2EX into itself in the corner, leading to damaging combos in Demon.

EX Spinner loops
Cost: .5 bar
You can loop j.EX on a standing opponent. 5a>j.EX In demon mode, catching someone in the corner while they are crouching can be converted into a KO.

5EX (1Hit),KC
Cost: 1.5 meter
Invincible forward attack canceled into Neutral. Same as above but Blues travels forward.
Allows you to escape the corner for 1.5 meter. Cancelling after the first hit of 5EX allows you to pop the opponent up with 5B.