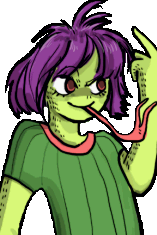 Anna is the younger sister of Ruri, the owner of a popular pub named Hammer Spot.
The pub has been operated by her family for over 100 years, but Anna isn’t really interested in helping.
She hates drunk people, so she rarely spends time there. She would much rather go out shopping and put together new fashionable outfits.
Occasionally, she gets angry with drunk customers at the pub and gets into fights. However, that has yet to hurt the business. In fact, some customers come to the pub just to see her fight.
Ruri plans on setting up a ring in Hammer Spot for Anna to fight in, promising that as long as Anna fights, she’ll never have to help with anything else at the pub. 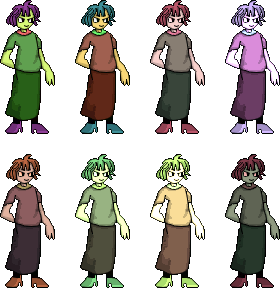 Anna's primary focus is using her 5EX venom ball to safely approach and poke with her extremely safe 2X slide.
She lacks very much in easy "combo-able" buttons and sports a smattering of solid tools as oppose to dominant buttons like other characters have.
Not only that, but her Ultras are extremely lacking. All of this and only having a grab as a combo-starter, forces her into a neutral dominant power-house that struggles to deal damage.

As such, Super is a very common Type for her.
She's usually seen hiding behind her fireball and spamming her nearly unpunishable 2X, forcing opponents into the corner where they'll eat a solid 100-ish damage combo if she gets her grab.
Very solid character, but in no way complex.

There's nothing very "tech-y" about Anna, if there's anything noteworthly it'll most likely be listed in the move-list.