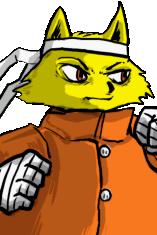 As the lone practitioner of the Kyanta fighting style, Kyanta is a Pomeranian that can take on any challengers.
Although he is very powerful, he only uses his strength for defense. Always having lived as a bit of a loner, Kyanta tends to avoid attracting too much attention.
He has been training Masao, a Jr High School student, to master the Kyanta Force.

Yes, he is a POMERANIAN DOG.
So is Gyanta. Taro is also a dog.
I know they look like cats but they're dogs, ok? 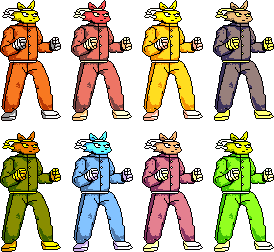 As his appearance suggests, Kyanta is a run-of-the-mill shoto character with standard fireball and DP.
His neutral game is very easy and versatile, thanks to his very quick j.B and j.A which allow him to bypass midscreen almost entirely.
Along with strong fireballs, his invulnerable DP, extremely safe B and A moves, he just runs neutral for free.

Since he is a shoto with such overwhelming tools, using this character is extremely straight-forward and easy.
A good pick for filling out your team or if you're just a person who doesn't care about anything besides winning.
(In which case, more power to ya.) 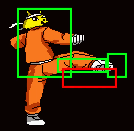 j.B is a very weird move, giving extra momentum to Kyanta on the way up and on the way down when done, allowing for Kyanta to land faster or jump higher.
It's a very simple Kyanta-style Tatsu, comes out in a single frame. Due to this, it can be used to link combos that wouldn't normally link.
Through the use of a KC, buttons can be done in the air after other moves, so j.B can be used as a pseudo-edge that makes you land faster and cancel landing recovery.

This is used in Kyanta's very strong FB-bonus 2X combo, learning it is essential to hitting the execution skill-ceiling and performing some of his harder combos.