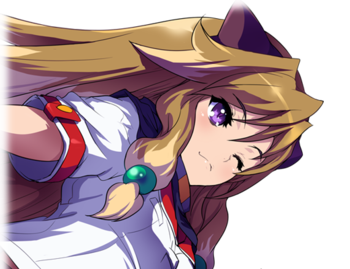 A warrior dispatched by the Inuwaka clan to support and aid the Millennial Guardian, Kamui Tokinomiya, Akane is the textbook definition of the doting, yet ditzy, older sister. An eternal optimist with an insatiable curiosity, she likes to think of herself as a self-styled arbiter of “cool”. Although she constantly worries about her younger sister, Nazuna, she makes it a point to never show it. She also is a very hard worker, but tries to hide that aspect of her personality as she thinks it makes her look uncool.

Akane has an instinctive knack for fighting, as well as the uncanny ability to quickly identify and exploit any enemy weakness. Her preferred method of fighting is to kick her opponent into submission, using her Arcana powers only when she feels it's absolutely necessary.

She has an extraordinary singing voice, an ability that allowed her to captivate Phenex, the Arcana of Sound. Akane listens to just about every genre of music under the sun and will frequently jump in and perform with any street buskers she comes across.

Including the Japanese branch of the Celestial Union, she has several friends and acquaintances that work to remove the planar rifts across Japan. She has trouble telling others up front that she can help, and instead resolves any trouble around her under the excuse that she is on a journey to train herself.

Akane is a rush-down character who can use "kotodamas" stocks to chain her specials into each other, even on whiff.

"finish with sweep 22x whenever you run out of kotodama

no need to home if you are close to them, or use homing if further away. more options maybe available depending on which kotodama charge you use.

coast to coast and easy damage