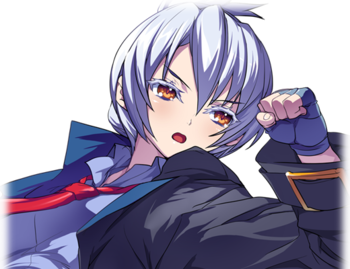 Almost preternaturally calm, Zenia is known for her almost glacial demeanor, as she rarely allows any emotion to show on her face. She has no memories of her childhood; her earliest memories begin with her arrival at a Russian orphanage. She was then enrolled into the Celestial police force, a body created by the Russian military and the Celestial Union, and given extensive training. However, she was discharged from service due to severe budget cuts.

Now a mercenary specializing in supernatural events, she wanders the globe without any particular reason, living only for her next job. She moved to Japan in order to help Rosenberg deal with situations they'd rather not dirty their hands with.

Rush-down character with a command dash with good follow-ups, some plus on block. She has pilebunker specials that can be air-unblockable (red) or fully-unblockable (white) if you release the button with the correct timing.