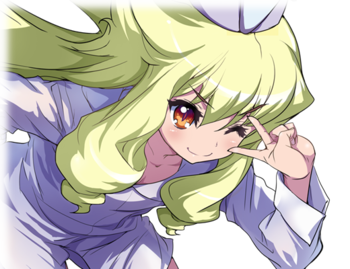 Mildred Avallone's twin sister, she crossed over into the spirit plane voluntarily seven years ago to become ethereal and, in the process, stopped aging. Although cheerful and outgoing, she is incredibly self-centered and stubborn, and has never changed her mind about anything, regardless of what others may say. Once she decides to do something, she will see it to the end, regardless of how trivial or meaningless.

Angelia hates being bored and often will talk to herself in an attempt to stay entertained. She'll do anything as long as it's fun, and has had a number of incredible adventures since entering the spirit plane. However, she constantly worries about her sister Mildred, who she left behind.

The object she holds in her hand is the magician Merlin (special skill: fortune telling). Although in the middle of her adventures in the spiritual plane, she befriends Fiona, who searches for a way to return to the physical realm as a human being. However, with nothing in particular to do, she travels through the planar rifts appearing in Japan and goes off sightseeing.

A small rush-down character with good offensive and defensive tools. Angelia can use B+C to cover her approach on her opponent's wake-up, as it is great at controlling space and extending pressure. She has three charges, being in [4]6, [8]2 and [2]8, which propel her in the appropriate direction. Angelia also has a dropkick attack that can be performed by holding A, B, or C (holding a button to tech during a combo may result in an accidental wake-up dropkick if the button is released after the combo is over). The held button can also be alternated to keep the dropkick charged, as it does more damage, gains some invul, and can guard break (it cannot Extend Force Cancel however). j.C is also a great tool due to how active it is as well as how much space it covers around her.

The Sparkle of Starlight (Forward)

The Sparkle of Starlight (Upward)

The Sparkle of Starlight (Downward)

Prepare to be Blessed!

Come and Get Me!